Despite all the angst about performance management, most companies aren't doing much to change the status quo. i4cp's latest research report focuses on the changes--or lack thereof--made to improve performance management (PM) over the last seven years. Specifically, we were looking for evidence that a significant number of organizations were moving to a ratingless PM system. What we found did not support this notion. Of all study participants, only 3% planned to either remove their rating system or their PM systems overall.

Using that information and the data from other responses from within the survey, certain other trends are apparent. These four major points highlighted the findings from the report, and a quick summary of those four major trends follows.

Use of performance ratings remains high, regardless of their perceived shortcomings

Some of those employees may not find the process fair because they received poor ratings, but that certainly isn't true for all 71% of them. This picture of fairness in PM is one that has been growing increasingly bleak over time; when asked if employees found the PM system to be fair back in 2006, the numbers were flipped--71% said they did find it fair. The 2008 recession and the subsequent lack of allocated money for bonuses and merit pay increases may account for some of the sea change in perceived fairness, but that doesn't make it any less of a problem.

With the wide discrepancy between what is being done and what should be done, it is easy to imagine that sweeping changes are being made. Nevertheless, this is not the case. Over the last three years, only 30% of surveyed respondents said their organizations had made changes to their PM system, and of those changes only 6% could be classified as radical transformations (removal of the rating system or removal of PM altogether). The follow-up question, "Is your organization planning to make any of the following changes to its PM process in the next year?" uncovered that only 3% of organizations plan on removing either the ratings aspect or their PM system altogether. 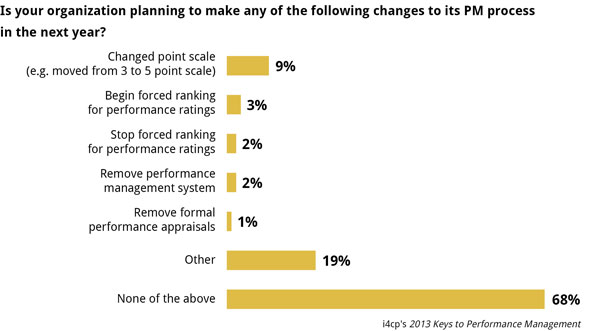 Admittedly, removal of performance ratings is not the only change that can or should be made to performance management, but most of the other ideas were to change from a five-point system to a three-point system (or vice versa), which is hardly a change at all.

Performance management is viewed as flawed, but no viable alternative has been taken up

Part of the problem is a lack of options for a solution. Although some companies have done away with ratings (REI and Adobe are two that are profiled in the research paper), that solution is not feasible for many organizations. Although the time spent on reviews and ratings can be significant, a replacement system of continuous conversations and instant feedback also requires a lot of time from employees. The value of that time should be better in a constant feedback system, but if the only goal is to free up employee time, this may not be the best answer for some companies.

Additionally, there are plenty of organizations that need or even require performance ratings. Companies that work with the public sector, or have highly structured job levels and concrete checklist-driven goals may find real value in ratings. Also, numerical ratings are valuable tools for the datafication of the workforce, allowing organizations to run internal research on correlations between performance ratings and quality standards in a given department, for example.

There are no easy answers when it comes to performance management

Despite a relatively short history, performance management has become so synonymous with compensation that separating the two is anathema to most established organizations. With only a few case studies of companies that have gone ratingless (four are available to i4cp members), most organizations are waiting until the bandwagon is firmly established before jumping aboard.

A final word: these trends should not be taken as negative indicators. The interest level in performance management is very high among C-level executives, and with the advent of Millennials joining the workforce and continuing globalization, finding ways to monitor and improve and develop performance is a useful and highly sought-after capability. Although changes to PM have been incremental, they have also been thoughtful and forward-looking, and the people who are involved in this field can rest assured that things are getting better. Slowly.