PAYING PEOPLE TO SHOW UP 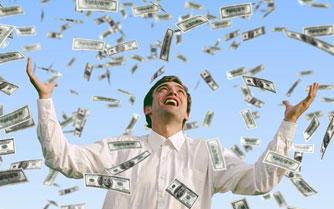 “You’re saying pay for performance doesn’t work … so what are we paying people for then?”

“If you aren’t paying people to perform, what are you paying them for?”

(Pause before answering), “You’re paying them to show up.”

“That’s what I thought.”

This exchange drew some – slightly nervous perhaps – laughter from the room. But I didn’t laugh. I was staring out the window, trying to decide if some deep insight had just been revealed. Is the philosophic concept of paying people purely to perform their jobs – with no monetary carrot or stick attached to performance outcomes – simply too alien a concept to gain widespread acceptance in the workforce?

Most of us are familiar with Daniel Pink, bestselling author of Drive: The Surprising Truth About What Motivates Us, and his work on this subject of performance drivers – or at least we can watch this and pretend to be. The controversial idea of eliminating pay-for-performance altogether has been floating around for the last five years or so, but after listening to top-level HR people at some of the world’s largest and most influential organizations discuss the matter, I can tell it’s an idea that’s gotten its legs.

Much of the recent talk has come from necessity. When the global economy tanked four years ago, many companies froze bonuses, salary increases and discretionary budgets. When i4cp asked in 2009 if companies had made cuts to hiring, salary or other incentives, 86% of companies responded in the affirmative. The concept of removing pay-for-performance went from an academic conjecture to a very real practice overnight. Flash forward a few years, and starting the second quarter of 2012, increasingly, companies have money that can now be allocated to performance incentives, yet they are asking themselves “Is this a sound investment?”

Regardless of where one stands on this concept – and even if we had two decades of data to support the decision – attempting to change the very nature of the compensation structure at a massive organization would be like standing in front of an oncoming avalanche with arms outstretched. Instead, the current level of activity is more akin to a scratching at the door that’s maybe building up to a knock. And maybe one day the door will open.

That isn’t to say that some companies haven’t already blazed this frontier. i4cp member companies IM Flash and Kelly Services have both moved to a rating-less PM system, and although that is not the same as leaving pay-for-performance behind, it does demonstrate a willingness to make major changes to the status quo. And right now, for every company that makes the leap, there are probably twenty standing against the wall, watching the risk-takers intently to see what can be learned from prudence and patience.

This whole discussion is motivating some organizations to change the ways in which they approach motivating workers. However, the most recent study conducted on pay-for-performance by i4cp, 2011’s Tying Pay to Performance, shows that the vast majority of companies (91%) are using some sort of pay-for-performance method and, what’s more, are reporting success in doing so. The survey predictably found that the key drivers of success, regardless of strategy, are open communication, clear goal setting and effective management. These drivers support the basic intrinsic motivation principle that people are more effective workers when they feel a sense of connection to their jobs.

I’m sure you’re thanking me for presenting two distinct and contradictory options as a best practice in compensation. No? Well it really comes down to this - if we acknowledge that pay-for-performance has its flaws for jobs that require creativity, innovation or self-direction, we can begin to put the structures in place that do drive behaviors for those types of jobs. Remember, for job types that are purely “follow-the-script,” pay-for-performance has consistently been found to be useful. Specifically, we can build procedures to ensure there is a conversation or some sort of recognition upon project completion, which will hopefully impart a sense of accomplishment.

Employees can reach their goals when given more leeway in methodology and timeline, and they should be given that leeway as long as their methods are consistent with the company message. This can be facilitated by pressuring managers to report back with review feedback from employees. Their task during a performance review should be to get at least one piece of information from the employee, and to do that we should remind them that the review process isn’t about telling, it’s about asking.

We are all familiar with presentations that involve a speaker standing in front of a room patiently reading the slides word-for-word as they appear. This is helpful for those of us struggling with literacy, but for the rest it’s difficult not to view this as a fantastic waste of time. Likewise, in reading off an employee’s score, ranking, or review, managers are, in effect, that same droning and intransigent presenter. All of that information is already there for the employee to see. Instead of assessing their boredom tolerance, the review should be a time to listen to the employee without interruptions. The meat of the discussion needs to be focused on changing methodologies, explaining reasoning or giving individual recognition for success.

In a perverse way, the Great Recession has been a valuable time for HR research. For instance, we are now seeing real data on the effect of not paying for performance, mostly since no one had any money to pay. So knowing that a very high percentage of companies made cuts in their pay-for-performance budgets, and seeing that the major stock indices are at their highest level in four years, it’s apparent that a great many have learned to do more with less. Of course, we’ll see how things play out as the job market heats up and the opportunities for highly skilled talent to look for greener pastures expands. Still, the trend of doing more with less will probably stick around long after the unemployment numbers readjust to traditional levels.

What won’t change, though, is basic human psychology. Given the fact that people in non-algorithmic/creative jobs tend to be less productive in a pay-for-performance model and that individual performance has an effect on company financial performance; it can be safely argued that traditional compensation models should at least be questioned out loud, even if the possibility of completely modernizing them is out of the question.

So yes, let’s pay people to show up. Why not?

Cliff Stevenson is a senior i4cp research analyst and has written several reports and articles on various human capital subjects. Cliff is the lead researcher for the i4cp Performance Management Exchange and the Evidence Based Human Resources Exchange and was previously the head of HR for a Boston-based consulting company.