i4cp's managing editor, Lorrie Lykins, sat down with John Coné, Principal, 11th Hour Group, who will be speaking at the five thought leaders who will be speaking at the i4cp 2011 Annual Conference and asked him a few questions loosely based on the well-known Proust Questionnaire, which has been famously adopted by James Lipton, the iconic host of the A&E program Inside the Actor's Studio. We thank the speakers for their candor, humor, and willingness to participate in this less-than-traditional interview. 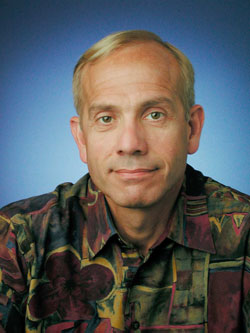 What is your favorite word?

Scenario. My second favorite word is credenza. I've always tried to have a credenza in my office so that I can write scenarios and say, ‘Oh, I have a scenario on just that topic over there in my credenza . . . .'

What is your least favorite word?

What turns you on?

Anyone who is passionate about an idea that I totally disagree with. I just love that because I know it may be an opportunity to learn something or even change my mind.

What turns you off?

Attacking people rather than ideas in public discourse. I hate ad hominem attacks.

What sound or noise do you love?

The sound of a single drop of water falling into a puddle in a cave. It makes a noise that sounds like this: dwoik!

What sound or noise do you hate?

Someone trying to play a song on a saw.

What profession other than your own would you like to attempt?

You know, I really wanted to be an astronaut but I have motion sickness, even on an airplane. A couple of years ago I did an executive program that had Neil Armstrong as a guest and that was a marvelous moment for me to be able to meet him.

Teaching delinquent children in a reform school. I am in absolute awe of a friend of mine who does this. I could not do what he does.

Who or what has influenced you the most in your career?

It was a gentleman named Walter Braden who was my first employer. He drove a trash-hauling truck in a little town in Illinois and I was his assistant. Walter taught me the skill of barrel knocking.

Back then in small towns everyone had two 55-gallon drums in their back yards. One barrel was what you threw trash into like bottles and cans - this was before recycling - and the other one was called the burn barrel so anything you had that could be burned you would toss in there and burn it down to ash. Walter's job was to drive around the back alleys of town and empty the barrels into his truck and then drive that material out to the junk yard.

So I was his assistant and for the first week that I worked for him my job was to get the barrels to the back of his truck. He had a hydraulic tailgate that would lower to the ground and you would get the barrels onto that and he would lift them up and dump them. He let me struggle with these 55-gallon drums for a week before he finally looked at me and said: ‘Would you like to know how to do that a little easier?'

That was the first thing that Walter taught me - the notion of the teachable moment. If he had tried to tell me how to it that first day I wouldn't have listened. But even with a fifth-grade education, Walter knew how to tell when someone was ready to learn something.

He said ‘watch this' and he tilted a barrel on its edge and rolled it along the ground. I had been trying to pick these things up. What he said was, ‘You just have to find the right angle,' and what he was talking about was leverage. Here's how to take something that's difficult and by approaching it differently you can find leverage.

And after I had been rolling these barrels hand-over-hand for about another week he said, ‘Would you like to know how to do that a little easier?' and I'm thinking there can't be an easier way that I didn't already think of. But he leaned this barrel on its edge and instead of rolling it along hand-over-hand he spun it and it just started rolling on its own and he walked along and rapped on it with his knuckles - he called it ‘barrel knocking' and by tapping it as it rolled along he could steer it left or right with minimal effort all the way down the alley to his truck. That was creating and using momentum to do something that was otherwise incredibly difficult.

Those lessons have been tremendously influential in my professional life - the whole idea of finding the teachable moment, finding the place where there is leverage, then creating and using momentum so that overwhelming tasks are a heck of a lot easier.

There have been many other influences in my professional career and you would recognize those names, but to be honest, Walter Braden was the first.

If you could travel back in time and deliver a message to yourself at the age of 20, what would it be?

I wouldn't. I'm a believer in what quantum theorists say about the butterfly effect - the chaos theory - and I wouldn't want to risk making some minuscule change or slight adjustment that could result in some sort of catastrophe. One never knows what could happen when fooling around with destiny. There's obviously the whole catalogue of mistakes you've made along the way and it would be great to be able to fix those but it's best to leave it alone.

John Coné will present "John Coné: A History of Failure" at the i4cp 2011 Annual Conference: Next Practices of High-Performance Organizations. The conference takes place March 15 - 18, 2011 at the InterContinental Montelucia in Scottsdale, Arizona.

Learn more about the conference and John's presentation.