EXECUTION > STRATEGY, BUT IT'S ALL ABOUT TALENT

Execution trumps strategy all day long. Even a lame strategy well-executed is better than a killer strategy poorly executed. So what does it take to move from a good strategy to actual execution? i4cp's latest study, Executing Corporate Strategy: a Global Study, found that a number of trends emerged that were all slight variations on a central and worrisome theme. The bottom line: it doesn't matter how good the strategy is. If you don't have the talent to follow through, you're done.

The four main findings from i4cp's study on what it takes to implement effective strategy execution are:

The first three of those findings, although slightly different, are similar enough that there's no way to extricate one without impacting the others. Our research showed that clearly what is happening in successful, high-performance organizations is that their leadership is taking a systemic approach to strategy execution. So how do you apply that to organizations that currently don't have the requisite pieces in place?

Here's how: Dr. Scott Snell, Senior Associate Dean, Executive Education Darden School of Business at the University of Virginia found remarkably similar results. In a paper co-authored with Kenneth J. Carrig, and Aki Onozuka, titled In Search of Execution, Snell found that what was holding many organizations back wasn't the strategy itself ("I would rather execute an average strategy well than execute good strategy poorly", as Mark Blankenship, Ph. D., Chief People, Culture & Corporate Strategy Officer at Jack in the Box says in the i4cp paper), but rather the capabilities of the organization.

"When you are trying to execute, you need to look at the capabilities you have in place," says Snell. During the course of the research Snell and his colleagues conducted, which included about 50 interviews with chief human resource officers from Palo Alto to Shanghai, the same themes emerged as those that came up in the course of i4cp's research. Snell and his team illustrate these themes with their 4A model: 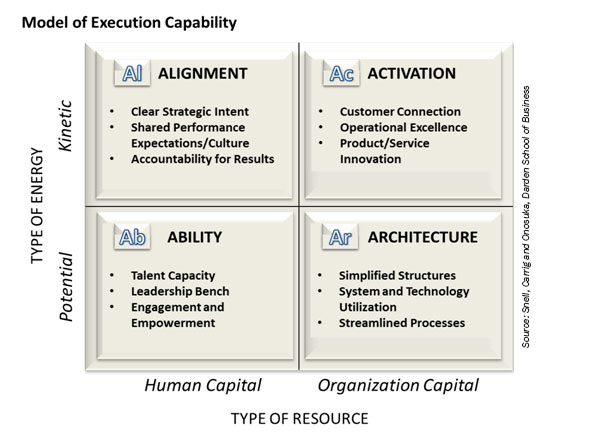 In this model, visible support is evident in simplified structures, regular communication can be seen in shared performance expectation, leadership priority is reflected in the clear strategic intent, and a common threat (which, at its core, has to do with understanding the market) is described as customer connection. Where the 4A model really compliments the i4cp research, though, is in the ability capacity.

Too often in the course of strategy execution, the importance of the human resources function is overlooked. The talent, culture, and drive to successfully handle a strategic shift are all key components of an organization's ability to actually make their strategic vision happen.

Snell recalls a conversation he had on this point with an executive at a firm known for its adaptability: "Strategy execution is not a case of 'the gun goes off and now everyone should start running'; the corporation really should already have had a running start, and the execution then deals with the myriad obstacles and shifting finish lines that are commonplace in modern business."

An often repeated concept in the course of the interviews conducted forExecuting Corporate Strategy is that the strategy itself is not as important as the execution, and other research bears that out. Snell spoke about a study that found that the strategy in and of itself did not differentiate between organizations that performed in the upper or lower quartile, but that execution did.

The ability to execute, and the interlocking systems that are absolutely required for organizations to execute successfully, are consistent in their form and type in both i4cp's and the Darden School of Business's research. From both of those resources, organizations can create blueprints and dashboards to plot and measure their efforts, but one point remains clear: none of these execution strategies are independent of each other. For a company to truly drive success, it must fire on all cylinders. This capability starts with talent.