Do You Use Social Media Internally in Your Organization?

Ask this question of most HR professionals and you’re likely to get responses such as, “we utilize LinkedIn as a major source for candidates,” or “our marketing department does a really good job of using Facebook and Twitter to promote awareness of our company and products,” while another might say, “we don’t allow our employees to use Facebook and YouTube during the workday. If we did, our employees would never get anything done.”

Responses you’re less likely to hear include, “we use Microsoft SharePoint as a shared workspace for members of our development team to collaborate on various projects,” or “several of our employee affinity groups have created their own Yammer groups where they can network with each other and plan upcoming events.” These are two great examples of social media use in organizations.

In rare cases, a social media savvy HR professional might say, “we rely heavily on email and instant messaging and most of our senior leaders maintain a blog on our company intranet.” Many of you reading this post might be thinking, “Email? Instant messaging? Those aren’t examples of social media!” In fact, email, wikis and blogs are some of the earliest tools that were developed as part of the second-generation Web (commonly referred to as, “Web-2.0”).

So Why All the Confusion? 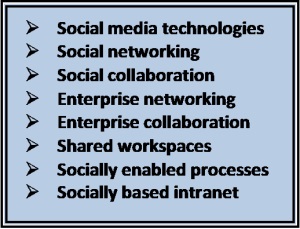 Perhaps it’s the myriad of terms used to reference these kinds of tools (see insert for a few examples), or perhaps we simply don’t have a good working definition of social media that resonates internally with an organization.

In the ASTD/i4cp report, The Rise of Social Media: Enhancing Collaboration and Productivity Across Generations (2010), social media is defined as technologies designed to facilitate social interactions and communication, and are generally used to support “many-to-many” dialogues. Built on Web 2.0 technologies, social media tools enable the creation of user-generated content that is dynamic and facilitates a two-way dialogue between individuals or groups of individuals. In an organization, social media technologies can help employees to connect, interact, share, and collaborate (see WARNING below) with others regardless of the time, geographic location, or position in the organizational hierarchy.

While some traction has been made in the last few years, it is most likely happening outside of HR. I would venture to guess that organizations that have a social media strategy in place were driven by the marketing or communications functions, and not an HR initiative. In my opinion, HR as a whole is still stuck on hammering out the right social media policy to protect the company. Meanwhile, pockets of individuals in their own organizations have gone off and either built their own tools or have implemented inexpensive stand-alone solutions.

I’m not saying having a social media policy isn’t important. Without one, organizations run the risk of their employees running rampant and potentially doing more harm than good. Rather, not having a social media policy seems to be the biggest obstacle to an organization beginning to adopt the use of social media technologies. A policy that covers the basic common sense stuff (i.e., don’t say bad stuff about your company’s products) and has only a few major restrictions is all you need (caveat, I am not a lawyer). The point I am trying to make is craft your policy and move on. The tools are out there and the demand is high. HR needs to get ahead of the game.

There is rarely one factor that explains why adoption of a new technology has not begun or has failed in an organization. What other factors do you think impede an organizations ability to embrace social media internally in their organizations?