Sources of worldwide labor shift rapidly. This is not always due to forces that exist within a source country’s labor pool, such as the education and work prospects of their workers. It also, occasionally, is a result of forces that exist within the country that is looking for source of new recruits or within political arrangements between the home-base and source countries. In the latest i4cp research study, High-Performance Global Staffing: Shifting Labor Supplies and Strategies, an example of this is seen in responses to the question about which countries are used for recruiting technical talent. 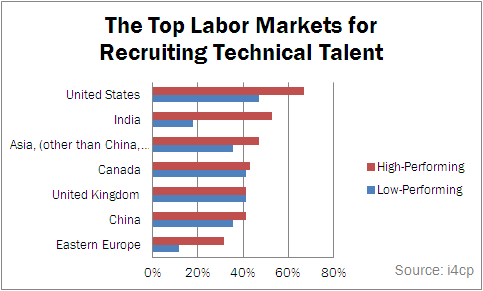 India, Asia (excluding China, Japan and India), and China account for three of the top four non-U.S. labor markets being sourced, as may be expected due to their prodigious technical talent markets and relatively – in comparison to U.S. – low cost wage-earners. But it’s the fourth source country, Canada, that’s prominence on this list is not as easily explainable.

Although it is a geographic neighbor to the U.S., the same is also true for Mexico, which is 25th on this list. So proximity alone doesn’t clarify Canada’s prominence as a technical talent recruiting hotspot. Nor is Canada blessed by an extremely large technical talent labor pool, although that sector is growing and the recent exodus of talent from RIM will help to swell the ranks. What Canada does have is a visa agreement with the U.S. under the North American Free Trade Agreement (NAFTA) that allows for a theoretically unlimited number of Canadian workers to obtain a visa to work for American companies. This agreement also covers Mexican citizens. Under NAFTA – and unlike the H1-B visa that has to be acquired by workers from non-NAFTA countries – the TN-1 is not capped, which makes it much easier to employ Canadian citizens. Also unlike the H1-B, the TN-1 is limited to certain professions, but those professions cover nearly all technical jobs. Even if employees are hired to work in their home country, a growing number of companies know it’s important to be able to move technically skilled workers and managers to the region where they are most needed– another finding from the full report. So having a less-restrictive immigration status can often offset the higher wage price in the long run. The reasoning behind any given set of responses is purely conjecture, and each organization has a unique set of motives that drive decision making, so no true conclusions can be drawn from this data. However, Canada’s placement above China on this list is certainly noteworthy, and a phenomenon that’s worth keeping in mind when sourcing technical talent that will potentially bring less red tape and limitations along the way.
Knowledge Centers
Recent Articles