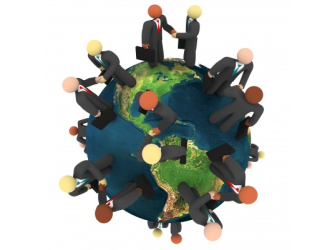 Nor were expensive labor costs and global outsourcing, two factors commonly blamed for lost jobs in the U.S., cited as significant drivers of unemployment. Only 9% of respondents believed that current unemployment rates are a result of U.S. labor costs being too high, and 12% indicated they thought that companies’ decisions to expand their workforces in places other than the U.S. are negatively impacting domestic hiring. 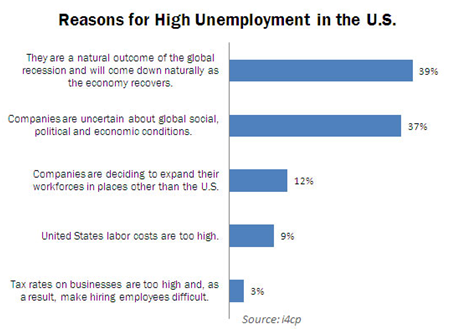 The HR professionals surveyed overwhelmingly cited global issues and economic uncertainty as the primary causes of unemployment. Thirty-nine percent of respondents stated that high unemployment rates are a natural outcome of the global recession and that hiring will improve naturally as the economy cycles back to recovery. And 37% of respondents said that unemployment rates are a direct result of companies’ uncertainty about global social, political, and economic conditions, which result in their reluctance to take on more staff.

Companies are planning for global expansion

Though caution toward hiring lingers, 93% of respondents reported that they believed their company will either maintain or expand their global workforces in the coming three years. Among the high-performing companies – those that outperform competitors in revenue growth, market share, profitability and customer satisfaction – that percentage was a staggering 100%.