The Thorny Issue of Gender, Pay, and Perception

With the new Gender Pay Law going into effect in Massachusetts this summer, standalone pay equity laws already in force in many other states, and legislation in process in others, it seems timely to gauge people’s thoughts on the issue. The Institute for Corporate Productivity’s (i4cp) most recent pulse survey explores pay and gender, and addresses some strongly held beliefs, starting with:

The topic of our survey seemed to resonate along gender lines; seven of 10 people who participated identified as women. Most (71%) were more senior—managers, directors, VPs, and above. Of the 365 people who responded in a 72-hour period, most overall (49%) said that gender pay inequity is not a problem in their organizations. But nearly one-third (29%) said they don’t know if it’s a problem, and just 21% acknowledged that they believe gender pay inequity is a problem in their companies. 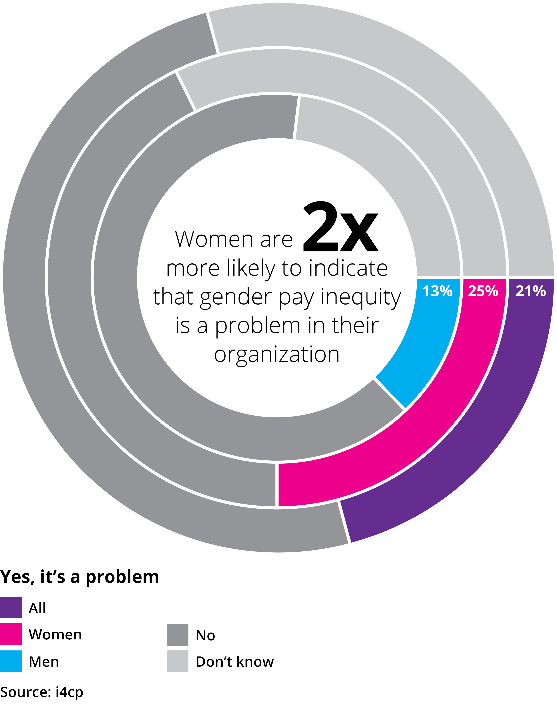 When we looked at the differences in responses along gender lines, women were 2x more likely to say that a gender pay gap is an issue on their organizations.

While the existence of a gender wage gap in the U.S. is often debated by naysayers, it is a fact supported by decades of data collection conducted by the federal government and other credible sources such as Pew Research, which refers to it as “narrowing, but persistent.”

The gender pay gap is the focus of the research of Claudia Goldin, a Harvard University professor of economics and director of the Development of the American Economy program at the National Bureau of Economic Research. Goldin discussed the topic on a recent episode of the podcast, Women at Work, produced by HBR. Goldin was asked about the 20% pay gap figure that sparks so much controversy—the most commonly cited data is that women make 80 cents for every dollar earned by men—about 20% less on average in the U.S. But how do we know this to be true?

“It is true. It’s true because we can compute that as a fact from very good data from the current population survey. But it has a definition, and that definition is the ratio of what the median woman who is working fulltime year-round earns over the same for a man,” Goldin said.

This definition comes from the Bureau of Labor Statistics, has been used for several decades, and we have consistent longitudinal data behind it. But the issue, Goldin says, is that we don’t have a single statistic for the gender wage gap, which is dynamic across a person’s working career. And men have a much longer right tail in terms of earnings than women do. Goldin’s own research has found that men and women who enter the workforce with MBAs tend to make the same initially, but a divergence appears after a few years and at the about the 10-15-year mark, the gap grows exponentially, with men earning 60% more than women. Of course, there are many factors at play here, the most obvious of which is parenthood.

Okay, maybe pay inequity exists, but not in my organization

Among the professionals who responded to our survey, 45% reported that a pay audit has been conducted in their organizations, and 14% said that while their organizations haven’t done an audit yet, plans are in the works to do so. There have been no audits and there are no plans to do so in the future among 16% of survey respondents’ organizations. And one-quarter of respondents said they didn’t know the answer to the question, suggesting that perhaps transparency in pay conversations may not be part of the culture.

Those who are skeptical about the reality of pay inequality may point to their own organizations as examples of it not really being a thing. I’ve been in many rooms among business leaders discussing this topic, and invariably, someone will stand up and say that their organization has conducted a salary audit and there is no pay gap (or there’s a tiny one—maybe one or two percent).

My question is: what and how did you measure? What variables were considered? What weights were assigned to those variables? I ponder the same when employers voluntarily release their data. How is the adjusted income actually adjusted?

One of the challenges here is that there is no set equation to calculate pay gaps. Another is what Henry Farber, a professor of labor economics at Princeton University who has conducted research on pay data refers to as the culture of silence about pay that exists in most U.S. companies. Lack of information may help to fuel and perpetuate pay inequality, Farber says.

The issue of gender and pay is about so much more than money—we all know this. The 20% gap is just one in a series of gaps over the course of a woman’s working career. It’s also about opportunity and access, flexible work, the choices we make, and many other factors. We will continue to examine this issue and share more data from our survey in the coming weeks, to include insights on how high-performance organizations differ from lower-performing organizations in their pay practices.