Best and Next Practices in Virtual Leadership

Of course, the obvious solution, as we’ve previously noted—training virtual leaders—is seriously lacking. While some leading organizations cover the nuances of virtual leadership during standard leadership training, a full two-thirds of survey respondents indicated that a lack of training is a barrier inhibiting better outcomes in leading virtual teams.

While more and better training in virtual leadership can help, our recent survey also surfaced several other best and next practices that organizations should implement to improve the effectiveness of virtual workers and virtual teams. 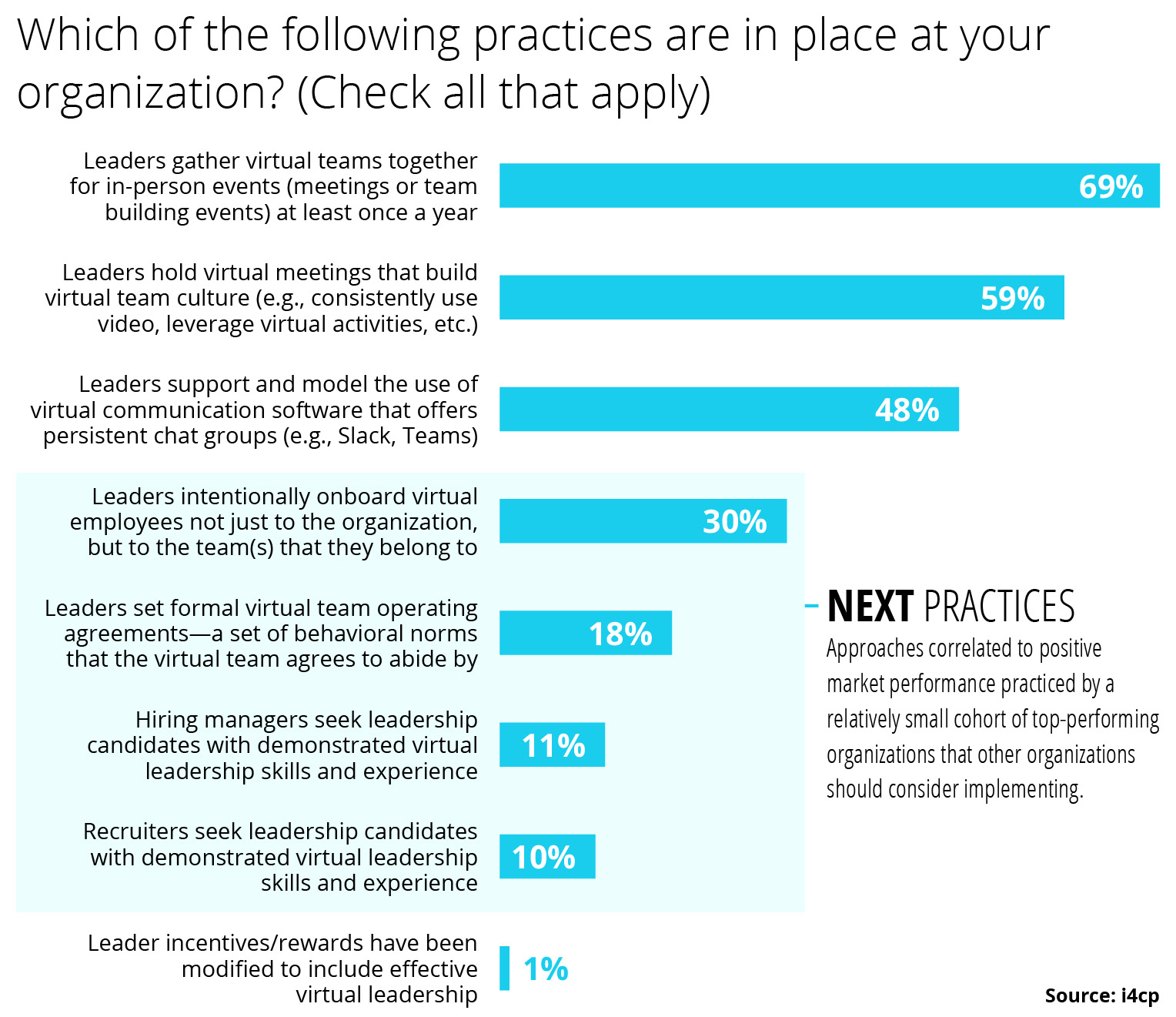 Our survey found three clear best practices, in that they are common and yet found more often in high-performance organizations than their low-performing counterparts.

Host in-person events. Leaders gathering virtual teams together for in-person events, often with a mix of business and team-building purposes, was indicated by 69% of survey respondents. The costs involved in doing this often limit the events to once a year, but that is usually enough to make a real difference in team productivity, collaboration, and engagement.

Humera Malik, VP of Learning, Engagement, Analytics and Performance at Electronic Arts (EA), agrees that getting virtual teams together in-person is critical, and goes beyond a few days with a formal agenda.

“My team is 36 people, and we make sure to get together in-person once a year—for an entire week. We do this to enable more relationship-building time, above and beyond the 2-3 days of formal meetings on the agenda. We encourage people to spend the additional time with colleagues they don’t normally see in-person, either one-on-one or in small groups,” Malik said.

Well-designed activities can make such virtual meetings as impactful as some in-person sessions.

A practice that Malik at EA follows for her team’s virtual all-hands meetings is leveraging break-out group activities usually at the start of the meetings as ice-breakers to help create a greater sense of connection.

Model the use of virtual technology. Using virtual communication and collaboration software is still new for many workers, especially those who are new to being part of a virtual team. So, it was not surprising that nearly half (48%) of survey respondents reported that their virtual leaders support and intentionally model the use of virtual communication software.

While basic online meeting and instant messaging software is commonplace, the more powerful platforms are those that provide persistent chat group functionality (sometimes referred to as “channels”), such as Slack, Microsoft Teams, and others.

EA uses Slack extensively, and Malik agrees that it is important for leaders to model the desired behavior. “For instance, sometimes a leader will need to force a conversation to move out of one medium and into another, say out of email and into Slack, if that is the more appropriate and productive place for it to occur,” Malik said.

Noting examples such as sharing recommended articles to read or wishing colleagues a happy birthday or happy work anniversary, Malik said “if the leaders continue to revert to email for these, it makes it much harder for the team to migrate over to the preferred platform.”

At biotechnology firm Genentech, the ability to connect effectively with colleagues from around the world is critical, and one way they enable this is through extensive use of Google's integrated set of tools including Google+ Communities. Andrew Chandler, Head of People and Organization Development, gave a great example of how this works in practice.

“One of our senior leaders posts a regular Friday note to share her reflections and observations, and others then discuss it in an asynchronous threaded conversation. This helps build alignment and understanding with a diverse and dispersed population.”

Next practices for virtual leadership

Our virtual leadership survey also surfaced a few next practices—approaches correlated to positive market performance but practiced by a relatively small number of top-performing organizations that other organizations should consider implementing.

Focus on talent acquisition. Both recruiters and hiring managers should seek leadership candidates with demonstrated virtual leadership skills and experience. This is a practice in use by only 11% of survey respondents overall, but is not used at all in low-performing organizations.

Virtual leadership experience is a competency that carries weight in the recruiting process at Electronic Arts. “If we know that the role will require being remote or being part of a distributed, virtual team, then that becomes part of the interview conversation,” Malik said.

“For some positions we have flexibility on where to locate it, and that usually implies the individual will be part of some sort of virtual team. Also, for some roles your peers might be in your location, but your manager and your internal clients might be located elsewhere. So, having experience with, and being able to demonstrate that you can establish relationships in such scenarios, is very important.”

Onboard for the virtual context. It might seem obvious that leaders should focus on onboarding virtual employees to the organization and to the various teams they belong to. But it is all too easy for managers and leaders in a primary office to not pay as much onboarding attention to their new remote employees. Only 30% of survey respondents (and only 18% from low-performing organizations) reported that their leaders effectively onboard their virtual employees to the organization and relevant teams.

To aid with onboarding overall, including remote employees or anyone who is part of a virtual team, see i4cp’s new Onboarding Toolkit, which includes checklists for HR/Talent leaders, hiring managers, and new hires, as well as checklists based on the first 30 days, first 90 days, and the first year.

Agree on desired behavior. Leaders of virtual teams should either set formal virtual team operating agreements or modify traditional team charters to provide a set of behavioral norms that the virtual team agrees to abide by. Only 18% of overall respondents indicated that their organizations have formalized such norms, with the percentage climbing to 26% amongst high-performance organization but again is completely absent amongst low-performing organizations.
Being a member of a virtual team is often a new experience for both leaders and team members, and there are subtle differences in how people communicate, interact, and collaborate in a virtual context. But at Genentech, Chandler noted that such nuances for virtual leadership are built into what they already do as team leaders.

“We are a low mandate culture and operate on a set of guiding principles such that leaders have a lot of autonomy in how they choose to setup and manage their groups. That said, we are a science-based company, and people are very interested in what works, and in sharing best practices.

So, many leaders have a charter by which they operate, something written that covers both processes and behaviors, and includes the nuanced aspects of virtual communication, the recommended ways to leverage the tools available, and so on,” Chandler said.

Documenting such preferred practices is one thing, but developing consistency in execution can still be a challenge. “Managing to these agreements, and holding people accountable to work in that way, this is where variation sometimes still occurs,” Chandler said. “While leader modelling always has value, I have found that peer pressure helps the most here—nudging peers who are not following the virtual team process or behaviors—as opposed to the leader formally driving the behavior.”

At EA, Malik noted that they have recently started to roll out a formal approach across the organization, which they are calling a management operating system. This will include elements such as policies about communication, meetings, and more, and will include aspects relevant to having remote members of your team.

As examples, Malik noted that “it is a best practice to not have all of your one-on-one meetings while in the car, because we know that can have a negative impact on engagement and employees feeling valued. Or in virtual meetings, making clear that it is okay to have a chat going on the side, as such conversations add value in ways not practical during in-person meetings.”

Virtual leaders as the new normal

The rise in use of virtual teams has surged so quickly that one aspect of talent management often used to incentivize behavior—rewards and recognition—has been bypassed by most organizations. Virtually no survey respondents said their reward or recognition programs call out virtual leadership qualities as such. Chandler at Genentech gave some reasons for this, noting “We don’t call attention to virtual leadership in this way, because today it is just too common. We promote and praise effective communication, but that includes virtual team communication—for us, the virtual team environment is not distinct.”

Malik at EA agreed, and said that while they don’t specifically reward strong virtual leadership as such, “we do acknowledge that there are better ways to do it, that there are nuances to learn, practice, and master.”

Malik’s comment captures the reality of teams and leadership today: for most, it will inevitably involve virtual aspects, so considering the needs of virtual teams and remote employees in training, talent acquisition, onboarding, and all other aspects of talent management should be part of today’s standard practice.