Last week’s U.S. Supreme Court ruling to halt the OSHA test-or-vaccinate mandate for businesses clearly signaled that leaders are back in the hot seat when it comes to responsibility for deciding on vaccination requirements for their workforces. And more are choosing to do just that.

On January 13th, the U.S. Supreme Court blocked OSHA vaccine-or-test mandates for large organizations (those with 100 or more employees). The court let stand a vaccination mandate for employees of healthcare facilities that receive Medicare or Medicaid funding.

According to a new Institute for Corporate Productivity (i4cp) survey—for which data was collected just prior to the legal decision—39% of the 763 participating business leaders have imposed their own mandates already, requiring proof of full vaccination for all workers as a condition of employment unless exempted for medical or religious reasons. The figure was up from 29% in September 2021.

About one in five survey participants said their organizations were waiting for the high court’s decision before taking any action; the subsequent ruling left the door open for states to weigh in on mandates. Consequently, action at the state level could further direct organizational leaders’ next steps. And some may not object to that. i4cp’s September survey found about one in five (19%) leaders polled at that time stating that a government-imposed vaccination mandate would be something of a relief as they’d wanted to require immunizations but struggled with the decision.

More than half (54%) of this month’s survey respondents told i4cp that at least three-fourths of their workers are already vaccinated; 34% reported more than 90% vaccinated. 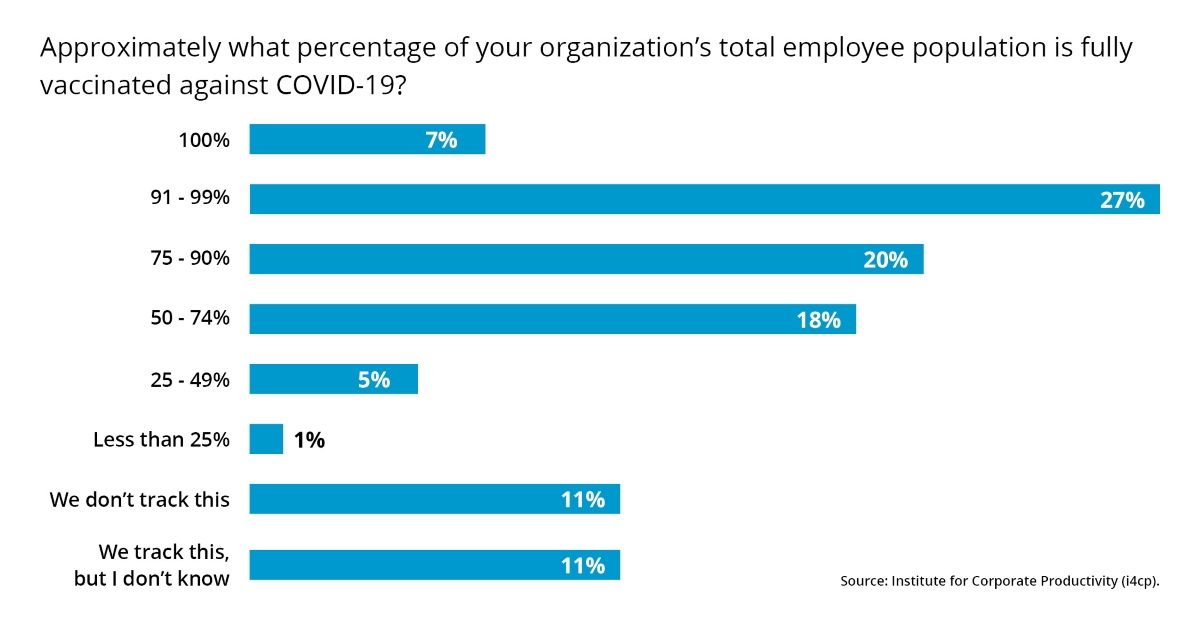 Partial vaccination mandates are in play for some companies, too. Among those i4cp surveyed, 38% say their firms are requiring (or plan to require) proof of vaccination, but only for employees who need to enter an on-site location. In addition, 42% reported that proof of full vaccination is required by their organizations for all non-employees who enter workplaces—vendors, suppliers, customers, or others.

Just over half of those surveyed say they still prefer to encourage (versus require) employees to be vaccinated; this percentage is nearly unchanged since the September poll.

Most organizations have defined “full” vaccination

About half of the business leaders polled by i4cp say that their organizations define “full” vaccination as both shots of two-dose vaccines, while only 1% consider one shot of a single-dose vaccine to meet that same standard. The latter figure could reflect the greater prevalence (and higher effectiveness ratings) of the two-dose Moderna and Pfizer vaccines.

One in four of those surveyed include boosters in their definition of fully vaccinated status, specifying one or two-dose vaccinations plus any recommended boosters.

Drilling down, i4cp found only 24% of survey participants reporting that their organizations haven’t addressed boosters yet, while 15% have already added recommended boosters to their vaccination policies. Mirroring the proportion of respondents encouraging vaccinations, just over half (53%) say they prefer to encourage, not mandate, boosters.

When it comes to the incentives offered by organizations to encourage both vaccinations and boosters, there has been little change over the past few months. The top-three incentives remain paid time off for post-injection recouperation, if needed (63%); paid time off to be vaccinated (57%); and provision of educational materials in support of vaccination efficacy (55%). As of January, only 12% of companies reported use of remuneration (cash, gift cards, etc.) as an incentive; even fewer (just 4%) offered discounts on healthcare premiums to fully vaccinated workers.

Is time running out for unvaccinated workers?

Currently, 35% of survey respondents say that their organizations require regular testing for unvaccinated workers as a condition of employment, and 34% require negative test results for those unvaccinated employees to enter an on-site location.

Who pays for those tests? Nearly one in four survey participants say that a decision hasn’t been made yet in their organizations. Among those who had decided, respondents were evenly split (at 17% for each option) that companies covered the cost or expected unvaccinated workers to do so themselves. 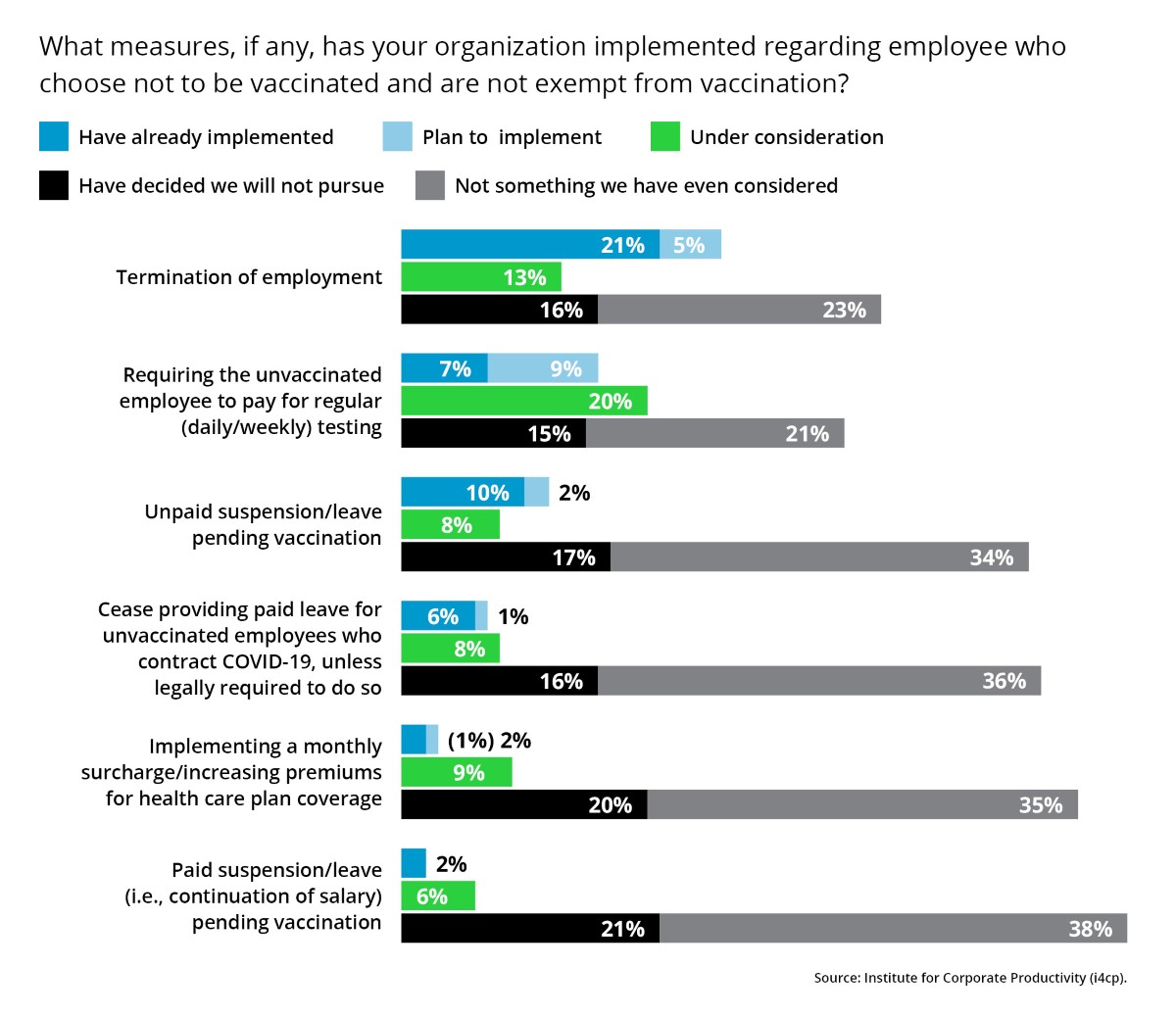 For employees who remain unvaccinated and are ineligible for exemptions, termination of employment is the punitive measure already taken or planned by the largest portion (26%) of respondents. Requiring those unexempt and unvaccinated workers to pay for their own testing ranked second (17%), followed by placing employees on unpaid suspension pending their vaccination (12%).

Survey questions on unvaccinated workers, encouragement incentives, and other topics found that many potential actions by organizational leaders are still under consideration. Further, results from the January survey reflect responses received immediately prior to the Supreme Court decision. Consequently, i4cp expects to see more shifts in those specific talent strategies as business leaders make post-ruling choices regarding vaccinations for their workforces.

For more than a year, i4cp research has monitored the evolving landscapes related to employee vaccinations and workplace safety. To follow our ongoing research into the latest actions and decisions on vaccinations, visit i4cp’s Employer Resource Center. While there, gain insights into the emerging era of flexible work and tap into the practices of high-performance organizations by registering for our free weekly series of 2022 Next Practice Meetings.

Carol Morrison is a senior research analyst at i4cp.

RETURN TO THE OFFICE PLANNING RESOURCES SERIES
U.S. Supreme Court’s Vaccination Ruling Puts Business Leaders in the Hot Seat
2.
Are You Sure You’re Ready for Employees to Return to the Office?
Optimizing Return-to-Office Strategies With Organizational Network Analysis
4.
Return to the Workplace Checklist
5.
Forcing Employees to Return to Office is a Mistake, New Study Shows
6.
Return to Office/Workplace Survey & Assessment Templates
7.
Redefining the Misnomer of "Return to Work"
Return to Workplace: Tools, Checklists, Templates
9.
Coronavirus: What Groups are Companies Making Special Considerations for as They Plan For a Return to the Workplace?
Knowledge Centers
Recent Articles