The Good News Amidst the Post-Election Hangover

The midterms are finally over. Almost. The political commercials have mercifully ended. Concession (and non-concession) speeches have been made. But a few controversy-filled runoffs loom in many states with early voting happening this week. And there are already rumblings of the 2020 race revving up.

So, to a degree the vitriol continues across cable news, social media, and other mediums.

I’m trying to look on the bright side of this year’s midterm elections. It’s great to know that record numbers of people got out to vote, many for the first time, for example.

But what I think about most is the seismic shift in workplace decorum and norms related to the types of conversations we have—politics specifically. What was once a no-fly zone is now an open forum.

My first corporate job (let’s just say it was the time of Ice Ice Baby and Madonna voguing everywhere) was memorable mostly because I had an extraordinary mentor whose advice still steers me all these years later. One of those bits of counsel: Two topics are unequivocally unfit for workplace conversation: politics and religion.

Things have changed. We are most definitely talking politics in the workplace these days.

An i4cp pulse survey conducted in advance of the midterms found that political conversations are happening at the office in half of the 400+ participants’ organizations, and they don’t view those discussions as a big deal—they aren’t creating distraction. And 45% said that they believe that organizations should take stances on current and potentially political issues.

We know from research and the literature on disclosure at work that people tend to feel closer to their colleagues when there is open conversation about personal experiences, values, and beliefs. But there’s also a good argument for segmentation—keeping your personal views to yourself at work—especially one’s political leanings.

But clearly, there’s a desire to know where organizations (and their leaders) stand.

And even if political conversations aren’t taking place at work, it’s fairly easy to get an idea of where people stand by looking at their online presence. For better or worse, there been an irrevocable evolution wrought by social media in terms of our sight lines into one another’s lives, interests, and activities outside of the workplace.

The upshot to all of this of course is that leadership extends well beyond the confines of the office. And what most of us expect of the leaders of our organizations is authenticity and consistent, positive role modeling behaviors that support a trusting, safe culture.

So, the good news from our post-Election Day pulse survey is that well over half (56%) of the 100 professionals we polled told us that their organization’s leaders had actively encouraged employees to vote this month. 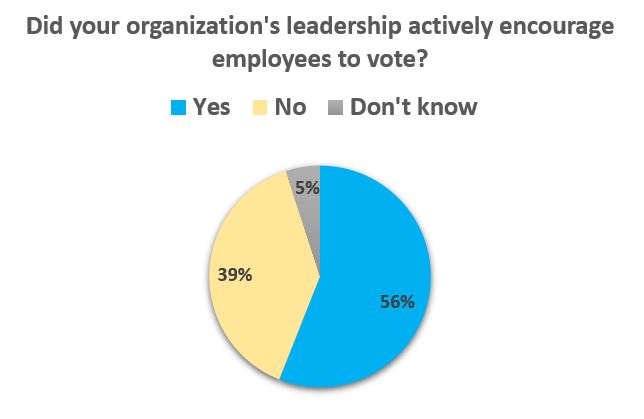 What’s happening in your organization? Are political conversations still taboo? If not, how do you feel about working closely with colleagues who have shared views you don’t agree with at best and at worst are repelled by?