One of the many areas of work life that was significantly disrupted in early 2020 was the way new employees were onboarded into organizations. Given the COVID-19 pandemic, on-site workers needed to be brought on in a safe, socially distanced way. Other new workers who would be remote—whether initially or indefinitely—needed onboarding in a radically different way than ever before: fully virtually, with no time spent at any organization headquarters or other location.

During the past two years alone, millions of new employees were onboarded in this fully remote way, and some organizations fared better than others with this dramatic change. Most could nail the basics of benefits and IT setup and administration, but many did a poor job supporting new remote employees in forging key relationships and networks, learning the organization’s culture, and in general hitting the ground running in their new roles. Many i4cp members had a leg up by leveraging resources such as the “Three Strategies to Accelerate Remote On-Boarding” and our Onboarding Toolkit to apply best and next practices—defined by i4cp as practices that correlate to better performance but are not yet widely adopted—to support their new hires, but the process remains a challenging one.

Accenture’s use of virtual reality for onboarding

One of the recommendations of i4cp’s toolkit is to leverage the power of virtual reality technology to give remote new hires an immersive and powerful introduction to the organization. This sort of innovative approach to onboarding has produced outstanding results for global professional services firm Accenture (an i4cp member company) and was one of several reasons that they were given i4cp’s 2022 Member of the Year Award.

The company’s virtual environments include a virtual campus used for onboarding new hires, redefining the new joiner experience as more global, immersive, collaborative—and scalable. On i4cp’s March 24 Talent & Learning Next Practices meeting (recording available), Allison Horn, executive director, global head of talent (and member of i4cp’s Chief Learning and Talent Officer Board), and John Goodyer, global talent capability lead, not only described the what and why of their use of virtual reality for onboarding, but took me on a tour of their immersive, 3D space—a demo that participants on the call were able to watch live.

To understand why Accenture has jumped into the metaverse, it helps to first consider the massive scale of the challenge that they faced. Accenture as an organization is the size of a medium-sized city with around 700,000 employees. But they are also a very dynamic organization, with 120,000 employees joining in fiscal year 2021—and 56,000 new hires in Q4 alone. Further, they are a global organization, with 200 locations across 50 countries. So, saying that internal processes at Accenture, such as onboarding, need to be scalable is an understatement.

Their innovative solution was to a create a digital new hire campus named One Accenture Park. Additional spaces include digital twins of many of Accenture’s physical offices, as well as an area dubbed “Nth Floor,” which is a virtual water cooler space where Accenture employees meet-up and hang out. 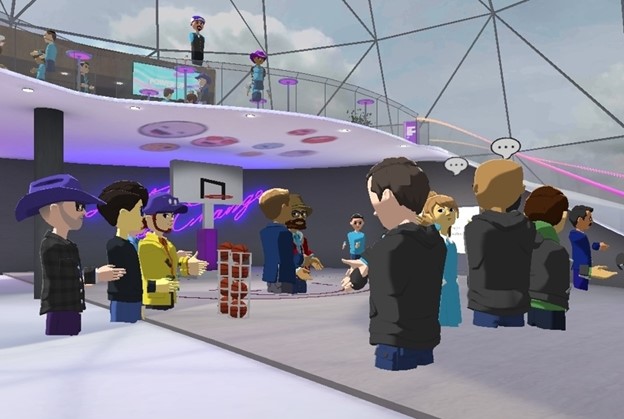 Such environments allow for new possibilities, including more immersive experiences than meetings on Zoom, WebEx, or Teams. Horn and Goodyer noted that such traditional virtual meetings still occur of course, as not all interactions benefit from a 3D environment. They stressed that the future of work will involve a daily mix of experiences for employees—in-person, on smartphones, on laptops, and in virtual reality (in 3D using headsets and 2D using laptops).

One of virtual reality’s benefits is the creation of omni-connected experiences at scale. Such experiences can be rich, shared, and consistent—no matter where employees are located in the physical world. As hybrid workforces continue to evolve, they can stay connected like never before by meeting in virtual offices and campuses, and using spatial audio to communicate as if they are in the same room.

In terms of technology, Accenture has partnered with Microsoft (also an i4cp member company) and leverages their AltspaceVR platform to enable their virtual events, meetings, meet-ups, and self-paced experiences. This enterprise product allows Accenture to manage access and virtual spaces centrally—their instance is private to Accenture –unless they invite visitors for a glimpse into their virtual worlds. 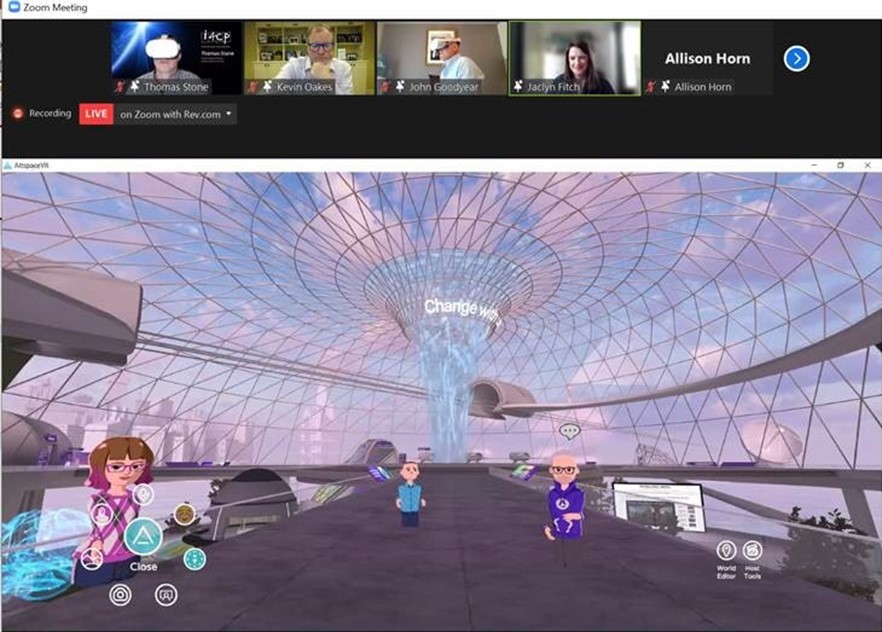 Accenture’s redesigned approach to the onboarding experience focuses on human connection. New hires play learning games with peers and are introduced into the Accenture community. Together they learn some of the history of the organization, and key concepts of its purpose and culture. Thus far, some 45,000 new joiners (as Accenture calls them) across 29 countries and all markets have been onboarded using the virtual reality platform.

Onboarding was just the beginning: Events, learning, collaboration, and wellness

While onboarding was perhaps an obvious early use case for virtual reality at Accenture, it is far from the only one. The company is also using VR to hold digital company events in the various 3D spaces they’ve created on the AltspaceVR platform. This is particularly helpful as an experience upgrade for larger online events, where multi-tasking and distractions can otherwise be common.

Collaborative work can also be enhanced by using virtual reality. Many of the same tasks that are performed on a Zoom, WebEx, or Teams call can also be performed in VR:

In some cases, performing such collaborative tasks together in VR won’t be a significant improvement. And a trade-off is not seeing colleagues’ faces, but their avatar representation, a change that has pros and cons depending on the context and goals of the work at hand. But for situations in which feeling as if everyone is in a shared space will elevate the collaborative work and experience, VR becomes a powerful and scalable solution.

Another VR use case Horn, Goodyer, and their colleagues at Accenture are pursuing is in support of employee wellness. They believe that VR workouts through apps such as Supernatural will give Accenture people a new way to enhance their physical and mental fitness, with an amazing experience that they can get passionate about.

Finally, learning and development is a clear use case for virtual reality technologies, and one that several companies have been pursuing in recent years. TD Magazine recently highlighted the work of Bank of America in using virtual reality for 20 learning programs for its 50,000 associates via The Academy, their learning division. Team members at Bank of America's 4,300 locations will use VR headsets to practice routine and rudimentary transactions, such as deposits and withdrawals, but also improve soft skills by practicing using empathy to handle difficult conversations and interactions with customers.

As described in the i4cp case example: “How Automation and Reskilling Benefit Walmart’s Associates and Customers,” Walmart has used virtual reality to train associates on how to use the company’s Pickup Towers, which are automated towers in the front of stores that dispense packages customers have ordered online in just seconds. They’ve also used virtual reality to train associates on how to use new technologies that involve customer interaction, because experiencing the technology with a simulated customer interaction creates more powerful and effective learning results: it can stimulate fight or flight responses in the learner and engage many other emotions, thereby imprinting the learning more deeply. The first or next time the employee experiences something similar on the job, their responses will be faster and better in terms of how they react to the customer.

On the March 24th i4cp call, Accenture’s Goodyer noted this kind of thinking when he described Accenture’s approach to leveraging virtual reality for learning. Higher retention rates from the learning is a major driving factor, but so is the richer collaborative possibilities when people learn together in the fully immersive environments of virtual reality.

Finally, VR isn’t just for training on hard skills where simulation is useful, but also for soft skills where people interactions are of greatest importance. Some early learning programs where Accenture is using VR include cybersecurity as well as inclusion and diversity programs.

Watch the recording of i4cp’s March 24 Talent & Learning Next Practices meeting to learn more about what Accenture is doing with virtual reality. See also the wide range of i4cp events coming up soon.

Tom Stone is a Senior Research Analyst at i4cp