Employers: The Aftermath of George Floyd’s Death is Impacting Employees in Multiple Ways

The death of George Floyd and the subsequent eruption of grief, outrage, and frustration that has gone beyond the U.S. to become a global reckoning about systemic racism and social injustice has had wide-ranging effect on culture, politics, business, and the workplace.

Sentiment about the power and impact of the ongoing events that have unfolded since the Memorial Day death of Floyd at the hands of Minneapolis police officers is clear according to the responses of 253 professionals (most of whom represent large organizations—those employing >1,000 people) surveyed this week by the Institute for Corporate Productivity (i4cp).

Well over half (56%) of those survey participants say that the event and its aftermath have created more stress in their organizations and drained productivity from an already strained workforce. Few said that there has been no discernable impact (12%). And not many said that their organizations have incurred direct damage to property or impact on business continuity as a result of unrest (17% and 14% respectively). Although for those whose workers were in the beginning phase of transitioning back into the workplace post stay-at-home orders, the impact of this is all too real and much of it is difficult to measure. 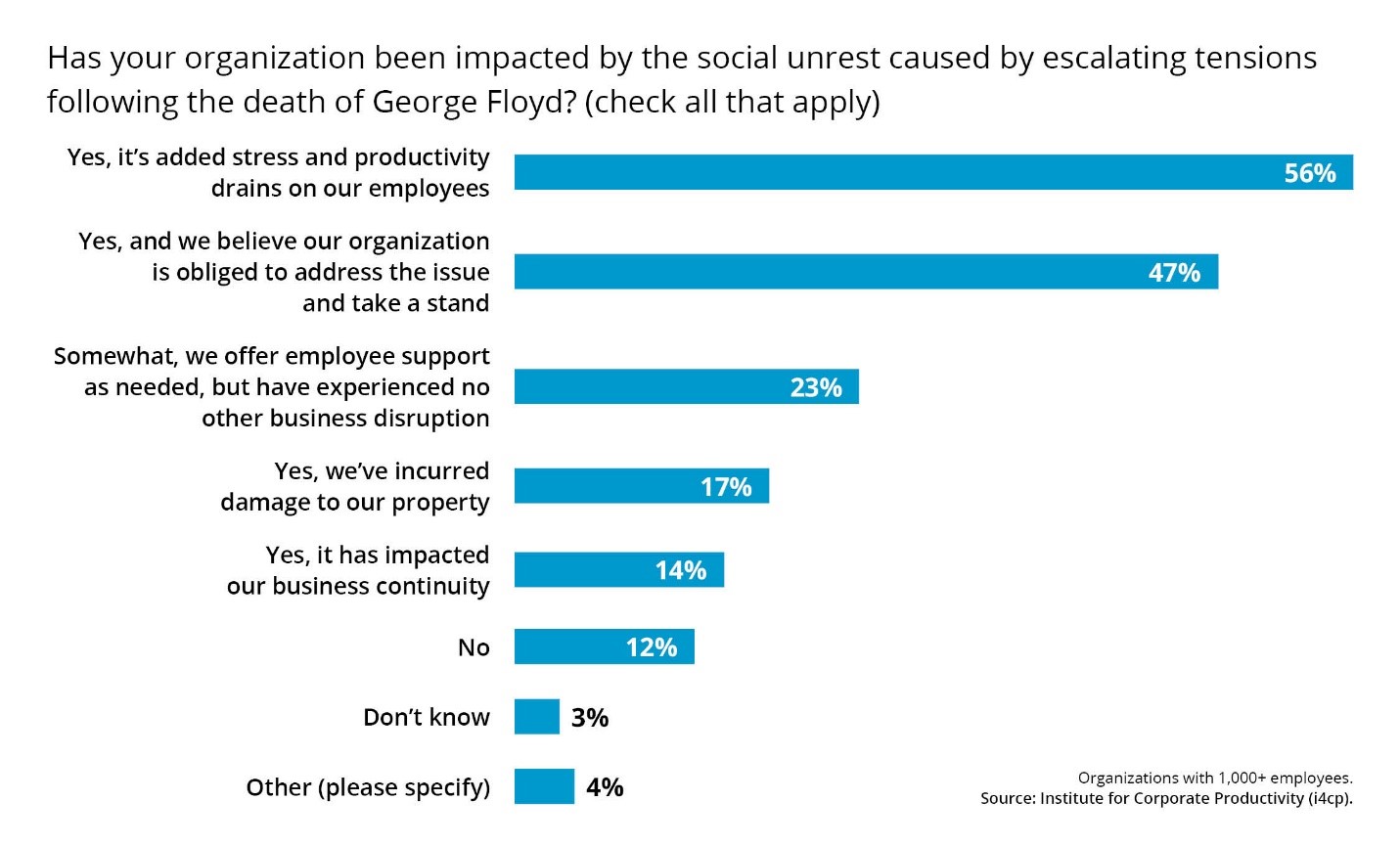 The Moral Obligation to Act

Employers say that in response to recent events, they are offering support to impacted workers in the forms of financial assistance, flexible scheduling, and counseling (42%), providing forums for employees to voice concerns such as additional ERG meetings, intranet portals, etc. (56%), and offering guidance or training to leaders on how to navigate more potential disruptions and worker distraction.

Significantly, nearly half (47%) of survey respondents said they believe that their organizations have an obligation to address the issue and take a stand. To that end, 68% have released an official statement internally to their workforces from the CEO or other executive team member referencing the unrest. And a combined 26% have already released an official public statement from their CEO or other senior leader or have plans to. A curated list of examples of public statements can be seen here, and you can listen to a call held on June 2 where we convened 430 executives to discuss how organizations are responding.

What is concerning and frankly astonishing is that a combined 24% say their organizations have no plans to release a statement either internally or externally. As i4cp has asserted in the past, silence on critical social issues leaves room for interpretation about where an organization stands regarding its culture and values—not only for its employees but for its customers and partners. To say nothing does in fact say a great deal. 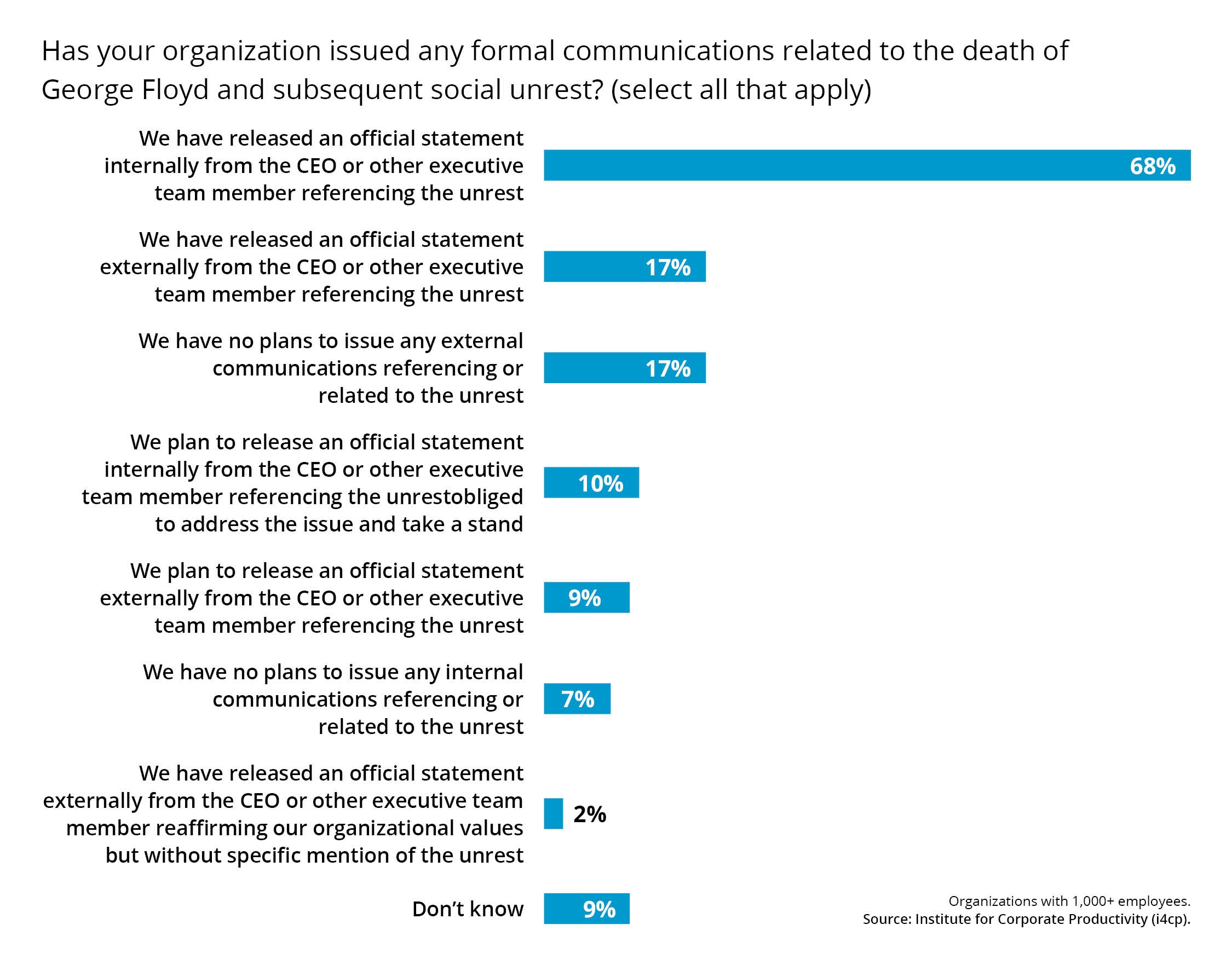 Our earlier research has shown that people care deeply about what organizations stand for (and against).

A study we conducted in 2018 with over 500 respondents on the topic of taking a stand in the face of controversy or upheaval found that from both a talent attraction and customer relationship perspective, the public position of companies on everything from health and well-being to cultural issues and environmental concerns matters.

Another concern: the length of time that some organizations are allowing to pass before making decisions about what to say or what to do. Or not. Many survey respondents commented that they are still waiting for direction or comment from their leaders, options are still being discussed and weighed, or that there are no plans at all to acknowledge the event.

This drives home the critical importance of having a crisis response team in place to help assess and respond to events quickly—and one that is agile, inclusive, and diverse in its makeup—a scenario in place in 25% of organizations.

Having this capability enables organizations to keep communication flowing with their various constituencies—and it’s not about having the perfect response—it’s about responding, period. Even if that response is to acknowledge that something terrible has happened and we are all trying to figure it out together. The simple act of recognition and validation can accomplish a lot, to include mitigating the incalculable damage that can be done to an organization’s culture and brand by silence. Don’t wait to shape a perfect message. Acknowledge our shared humanity and experience and build from there.

As one survey participant whose organization has a crisis response team in place noted:

“In the wake of the tragic death of George Floyd, we recognize that our employees are experiencing anger and grief and are wondering what they can do to drive positive change. To connect as a community, leaders across our organization are partnering to hold a virtual event this week, which will  be an opportunity to share how this tragedy is impacting us as individuals and communities, and to discuss actions we can take to create a more inclusive, empathetic, and equitable culture inside and outside.”