We’ve all heard this persistent theme—one that most organizations have been experiencing firsthand for the past year or so. While there might be some moderation of the most extreme difficulties of talent loss for some organizations, such as those that reportedly now find themselves overstaffed—for most, the challenges of a tight labor market continue.

The latest data from the U.S. Bureau of Labor Statistics (BLS) shows that the challenging employment and turnover environment persists. This morning, the latest BLS unemployment figures were released, covering the month of May. 390,000 jobs were added in the U.S., resulting in a 3.6% headline unemployment rate, just above the record low of 3.5% set in 2019.

This follows a similarly strong April, in which 436,000 jobs were added in the U.S., with both months being slightly above economists’ expectations. That said, the labor force participation rate dropped remained historically low at 62.3%. It had been slowly decreasing for over 20 years prior to the pandemic, then plunged in March/April 2020. It had been gradually increasing since then, but perhaps that growth has stalled.

Less widely covered by most media is the BLS’s Job Openings and Labor Turnover Survey (known as “JOLTS”) data report, which is also published monthly. The latest data (for the month of April) released on Wednesday of this week continues to make clear just how real “The Great Reshuffle” truly is.

That is impressive, but given that the country and the economy grows over time, the more important figure is the job opening rate—the number of job openings as a percentage of total jobs and openings. That too is at an all-time high since 2000, at around 7%, as shown here: 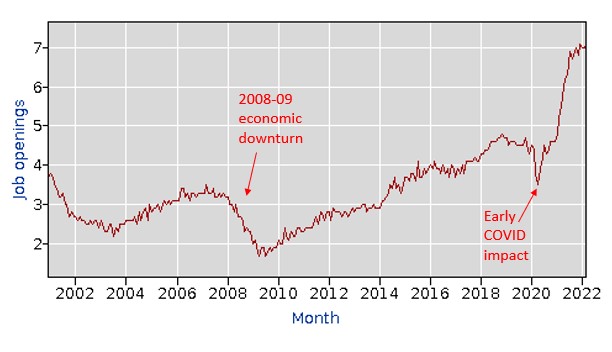 There is a lot of hiring going on, to be sure. Looking at the past decade for context, the hiring rate had been increasing steadily since the financial crisis of 2008/2009. After the pandemic-driven sharp decrease in March/April 2020, and then the surge in the early recovery, we are essentially back to the pre-pandemic trend line for hiring rate growth—and perhaps a bit higher. 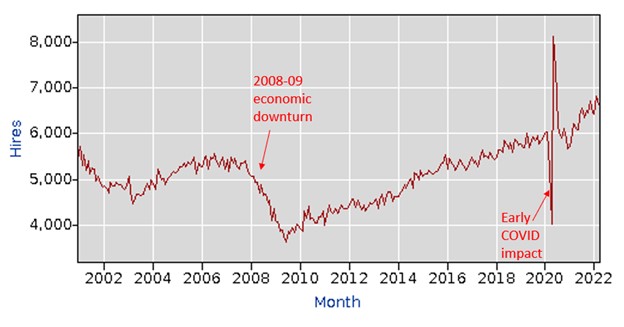 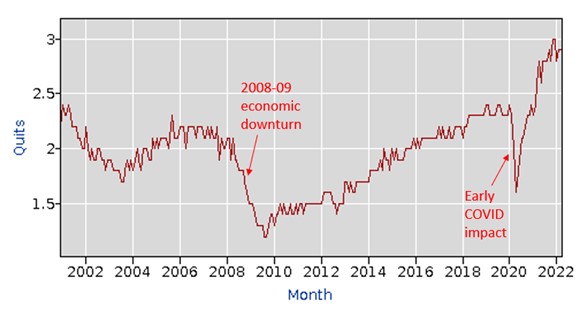 Context is very important to tell the full story of this data. After all, quits were artificially low from March 2020 through the end of 2020, as many people were furloughed or let go by organizations impacted by full or partial lockdowns, or the secondary impacts to the economy and their organization’s specific results. People who kept their jobs were obviously less inclined to quit in such a precarious economic environment.

Naturally then, some quits that would have occurred in 2020 happened in 2021 instead (e.g., people who delayed quitting for whatever reasons finally did so, moving on to another organization, in 2021). This explains part of the very high quit rate numbers in 2021, which the graph above shows as being above the upward trendline from 2010 through early 2020, when we generally had slow but steady economic growth, and hence employees feeling comfortable enough in the overall economy to take a chance on quitting and changing jobs.

But that phenomena of increased quits making up for delayed quits is now past, and we are still seeing elevated quit levels in this data—indeed record high levels (at least dating back to 2000). At this point, the numbers have gone beyond the point of making up for 2020’s decrease, an indication that “The Great Resignation” or “The Great Reshuffle” is continuing apace. It’s of course possible that the quit rate could increase if people have more confidence that COVID and the impacts to the economy it caused are fully behind us. But for now, we are through the initial phase of making up for delayed quits.

EVP and culture as an antidote to the JOLTS data picture

The latest study from i4cp and Fortune magazine, The Talent Imperative, offers antidotes to this dire employee quit rate situation. Among the seven key findings covered in the study is that leading organizations are emphasizing cultural elements of their employee value proposition (EVP) above compensation-related elements. The chart below shows what HR and business leaders said when asked to select the top three elements of EVP that will be most important for their organization to offer in the coming year. 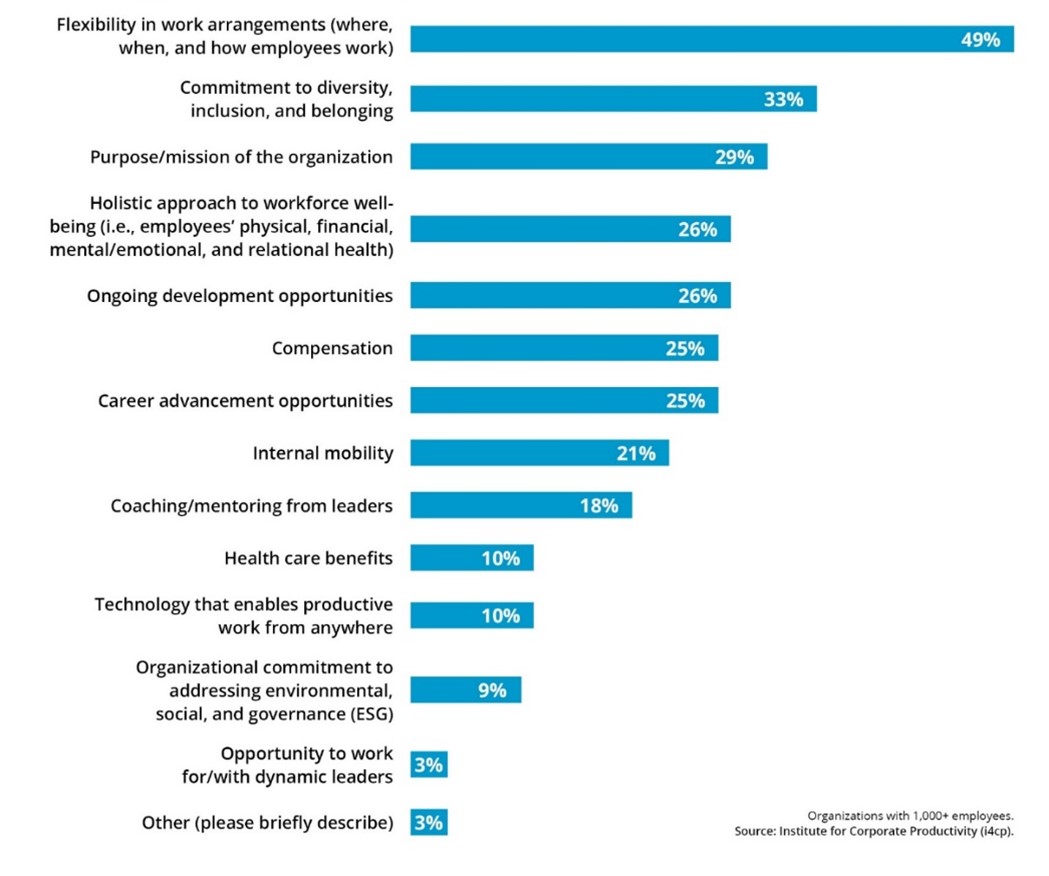 The runaway top result was flexible work arrangements—which i4cp defines as more than location of work or offering remote or hybrid work options for people in roles where this is possible. Flexibility includes choice in how and when work is performed for all roles.

Of the 635 larger organizations (those that employ >1,000  people) surveyed, 49% cited flexibility, followed by commitment to diversity, inclusion, and belonging (33%), the latter was cited more by those from high-performance organizations (41%) than those from lower-performing organizations (28%) as being important elements of their EVP.

Other important elements of EVP cited in The Talent Imperative study clearly show that an organization’s culture is at the foundation, such as having a strong purpose/mission and taking a holistic approach to workforce well-being, both of which outpaced compensation as top elements of EVP organizations are focused on.

Interestingly, this data aligns with earlier i4cp survey data from July 2021, which asked those surveyed to identify the elements of EVP that have proven to be most effective at attracting talent to their organizations. Here the picture is similar, with flexibility topping the list, followed respectively by internal mobility, coaching/mentoring opportunities, and cultural elements (e.g., taking a holistic approach to well-being)—again outpacing compensation as most effective at attracting talent.

The BLS data from the past few months makes clear that turnover will continue to be a challenge for many organizations. But a focus on culture and the overall employee value proposition can provide an antidote to the worst impacts of this economic environment.

i4cp CEO Kevin Oakes wrote the definitive book on how to proactively change organizational culture—Culture Renovation®: 18 Leadership Actions to Build an Unshakeable Company. This comprehensive blueprint highlights proven steps to strategically plan, implement, and maintain an organization’s best culture. i4cp also has a suite of implementation solutions available to help you get started, which you can learn more about here.

If your organization is not a member of i4cp, see The Talent Imperative executive brief to learn more about the results from this impactful study.

Members of i4cp should download the newly released full report which includes ample additional data from the survey; insights and case examples on all seven key findings from a dozen organizations including Target, Zillow, LinkedIn, Dow, WM (formerly Waste Management), and a powerful set of recommendations on how to not just survive, but thrive in this difficult economic and labor environment.

Tom Stone is a Senior Research Analyst at i4cp