A Robot Got Fired Right Before Christmas. Another Committed Suicide. When Will the Madness End?

Let’s face it. Expectations for robots are at an all-time high. Countless news articles feature them and seemingly everyone is talking about their future. Predictions are lofty. And the pressure to perform is starting to show. 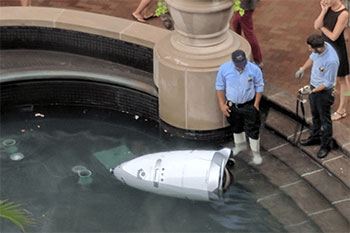 Recently the San Francisco animal welfare non-profit, SF SPCA, fired their robot after many complaints. And they heartlessly did it right before the holidays. But maybe that was for the best since the robot was repeatedly assaulted while on the job. The SPCA was using the robot to deter a homeless encampment from setting up tents on nearby sidewalks and a parking lot. In response, apparently some members of the encampment covered the robot in a tarp. Others lathered its sensors with barbecue sauce. The firing may have been a relief.

Other robots experienced more tragic endings. Earlier this year a different security robot was employed to patrol the Georgetown Waterfront in D.C.  It, too, had a rough go of it. It had been knocked over by a drunk, and before that it accidentally ran over a 16-month-old boy. It was probably not a huge surprise when the robot decided to end its misery by rolling itself into a fountain and drowning.

As long as expectations remain high, robots are at risk. And robotic projections are through the roof. Consider these statistics:

And therein lies the rub. While robots proliferate, human jobs evaporate. Which has many humans quite concerned.

“There will be fewer and fewer jobs that a robot can’t do better,” said Tesla founder and billionaire Elon Musk.

Pew Research shows a full 72% of U.S. adults are “worried” about a future where robots can do many human jobs. And in the U.S., that future is already here. A recent M.I.T. and Boston University report indicated that more than 670,000 U.S. jobs have already been lost because of robots displacing human labor.

"Robots, in particular industrial robots, are anticipated to spread rapidly in the next several decades and assume tasks previously performed by labour," the researchers claim in their report. In fact, an Oxford University study found that robots and “smart” computers could replace up to half the U.S. workforce within the next decade or two.

While the poor physical robots often bear the brunt of human’s fears about losing jobs, it’s the invisible robots that are the real culprit. Artificial Intelligence or “AI” currently reigns as the most overused – and misused – buzzword in business. But it is pervasive, and major companies are betting their future on it.

Paysa released a study in 2017 that showed Amazon investing $228 million in new AI positions, followed by Google ($130 million) and Microsoft ($75 million). In the last 4 years, the number of venture capital deals in AI companies rose from 160 to 658. Funding hit a record high of $5.02 billion last year as compared to just $589 million in 2012. Google even just started a venture fund aimed solely at AI startups.

AI is especially powerful when combined with machine learning, which allows computers to become smarter over time. Becoming smarter over time used to solely be the domain for humans. That aspect causes some to paint an eventual doomsday scenario. Renowned physicist Stephen Hawking has repeatedly predicted that artificial intelligence is quite likely to ‘replace humans altogether.’ 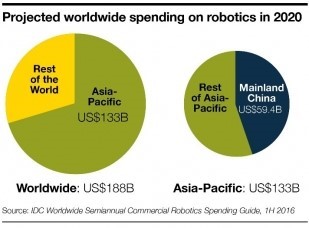 I predict that much of this robot hysteria is overplayed, but it’s easy to see why people get concerned. Consider these projections from the World Economic Forum (WEF) on when AI and robots will be capable of:

The WEF actually predicts that there is a 50% chance AI will outperform humans in ALL tasks in 45 years’ time. They also say there is also a 50% chance of all jobs being automated by AI in 120 years.

It would be foolish to expect all markets to feel the impact equally, however. PriceWaterhouseCoopers did a recent study that found the transportation and storage (56%), manufacturing (46%) and wholesale and retail trade (44%) have the highest proportion of job risk due to AI and robots.

The hardest hit? Financial Services. PwC reports that 61% of jobs could be flat out eliminated and replaced by machines in the financial industry. Which recalls another point in time when robot hysteria was all the rage, and the financial services industry was expected to be taken over by machines.

As a young boy growing up in the ‘70’s, my father was a banking executive in Massachusetts. His bank, like several others, began rolling out newfangled cash dispensing devices which we eventually called the Automated Teller Machine (ATM). By the mid-1990s, ATMs were everywhere.  And – as the name would imply – the widely held belief was that this was going to eliminate the teller job.  But a funny thing happened.  Since 2000, not only have teller jobs increased, they’ve grown faster than the labor force as a whole.

This is what mostly has happened in history. Technology often automates “tasks” but doesn’t often eliminate an entire job – instead technology changes the nature of the job. It’s important to make the distinction between automating an existing job versus technology making a job obsolete, which mere humans often confuse.

“[Technology rarely automates major occupations completely,” writes James E. Bessen of Boston University School of Law. “Many occupations were eliminated for a variety of reasons. In many cases, demand for the occupational services declined (e.g. boardinghouse keepers); in some cases, demand declined because of technological obsolescence (e.g. telegraph operators). This, however, is not the same as automation. In only one case — elevator operators — can the decline and disappearance of an occupation be largely attributed to automation.” 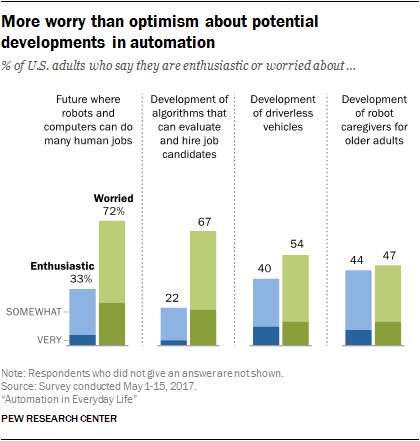 Pity the poor elevator operator. In 1950 there were about 97,000 registered in the U.S. census. Almost none exist today. If you are looking for humans who hate robots, the elevator operator is probably a good place to start.

So, with this proliferation of ubiquitous automation, robotics, and artificial intelligence, how should the organization respond?

ManpowerGroup recently surveyed 18,000 employers around the globe and found that companies are upskilling current workers to avoid losing employees to automation. To upskill, 74% are offering internal training, while 39% say they are hiring outside experts to transfer skills to employees.

Not all are going the training route. In 44% of companies, they are recruiting people with additional skill sets, while 29% are replacing their workforce with people who have the right skill set. 23% find it easiest to just outsource business functions to third parties.

Overall, when it comes to AI and robotics, the people and non-people issues will require strategic planning in any organization. This is one of the reasons there is a trend toward establishing the role of Chief Robotics Officer (CRO).  While the scope and responsibilities of the CRO will vary from industry-to-industry, it is clear that many organizations will benefit from the oversight, accountability and strategic initiative of this role.

And one side benefit of this role? It’s likely immune to being replaced by robots. Which very few roles can claim.

“Even CEO’s could be replaced by machines,” warns Jack Ma, CEO of internet juggernaut Alibaba.

Hmmmm. Maybe it’s time to stop feeling bad for all the pressure robots are under.

Kevin Oakes is the CEO of the Institute for Corporate Productivity.