Forced ranking, a performance management practice pioneered by GE in the 1980s, has been controversial almost from its inception. The popularity of the practice that compares employees against one another in a Darwinian sort of ranking system – also referred to as “stack ranking,” and “force ranking” – has waned in recent years, yet it’s in the headlines again, thanks to a feature in the August issue of Vanity Fair on the affect of stack ranking on Microsoft’s culture. Forced ranking calls for employee groups to be ranked based on their performance – for example, 20% high-performers, 70% medium-performers and 10% low-performers (who are usually sent packing) – a scenario that is a tough pill to swallow for employees as well as managers tasked with keeping their workforce motivated. 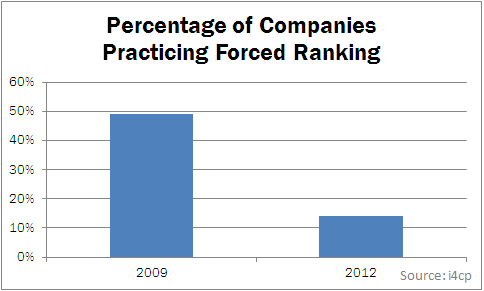 Results from a recent i4cp study on performance rankings, published in our Performance Management Playbook: Managing Critical Performance Challenges, show a sharp decline in both forced rating and forced ranking since 2009, with approximately two-thirds of companies that did utilize these practices abandoning them – from 49% in 2009 to 14% in 2011.This drop is understandable given the many shortcomings of force ranking:

Forced ranking can be an engagement and innovation killer.

A force ranking system more or less tells employees that no matter how hard they work, their manager is forced to put them in the bottom 10% group if they do not produce more than their co-workers. Not only can this cause employees to feel unmotivated and disengaged, it creates unnecessary internal competition that can be destructive to synergy, creativity and innovation and pull focus from marketplace completion.

We see significant flaws in the practice of breaking up performance rankings by department. An employee who is in the bottom 10% in a high-performing department might rank much higher when compared to employees in a different department that has lower overall performance. Why should that employee be let go when he or she outperforms those in other fucntions? This isn’t comparing apples to apples; it’s like comparing apples to bacon.

Companies unwittingly give a huge boost to the competition.

From a marketplace standpoint, the bottom 10% of employees at a company such as Microsoft might be the top 10% at one of their competing companies – meaning that when Microsoft jettisons their presumed lower-performing employees, they are providing the competition with fresh talent, and in many cases, their new highest-performing employees.

Human beings are much more complicated than data. Force or stack ranking might be a logical concept on paper, but it has unintended consequences when it comes to practical application. The process forgets to look at a variety of circumstances that might lead to lower performance rankings, such as a failure by managers to keep their workforce motivated or poor communication. Rather than separating employees into arbitrary ranking scores, it is much more beneficial for companies to look at what people are doing day-to-day, how they view the company, how they work within their teams, what they contribute to strategic goals, and what keeps them motivated. Performance management has come a long way since the 1980s, with some things best left in the past – force ranking chief among them.
Knowledge Centers
Recent Articles