Hogan got a big assignment from CEO Satya Nadella last year: help develop a "growth mind-set" at the tech giant. Here's how she and her team have tackled the challenge.

Perched on a stool at Microsoft's headquarters, Kathleen Hogan is the guest star for an in-house video aimed at software developers. Her interviewer, a junior marketing employee, asks the company's new chief HR officer to name the biggest problem for women in tech.

"That's a good question," Hogan says. Then, after a pause: "I'm kind of wanting to know what you think it is."

Without making a big deal about it, Hogan has just demonstrated the new way of thinking about work at Microsoft. Instead of handing down the official line, she asked for ideas from a young woman only five years out of college. 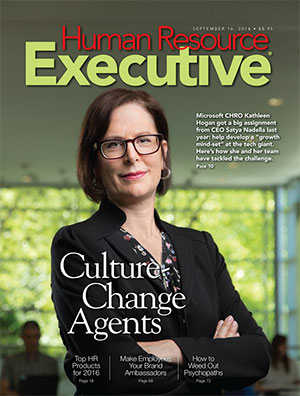 Becoming more open to contributions from a diverse workforce goes along with a massive change that CEO Satya Nadella says Microsoft needs. Soon after succeeding Steve Ballmer in early 2014, he asked Hogan to become executive vice president of human resources -- and to help him foster a new corporate culture.

Hogan -- a veteran Microsoft executive who had never before worked in HR -- started the job in January 2015 and has been moving at full speed ever since. She knows it's a tall hill to climb: Microsoft has 118,000 employees around the world. But she relishes the challenge.

"This is the modern HR," says Hogan. The department's role today is "being a partner in helping the business think about talent, and how we can change the trajectory of the business."

Her team has a daunting set of issues to tackle. The company, based in Redmond, Wash., is still shedding thousands of workers from the disastrous 2014 acquisition of Nokia's mobile-phone handset business. It's gearing up for a proposed $26 billion deal to buy the networking site LinkedIn. And the HR staff -- 1,500 professionals in 55 countries -- is retooling Microsoft's recruitment, development and performance-assessment practices as the venerable software company pivots into a mobile-first, cloud-driven world.

Big as those challenges may be, culture change trumps it all, says Joe Whittinghill, whom Hogan recruited from Microsoft's mergers and acquisitions team to join her in HR. He oversees talent management and other key functions.

"The most important role HR is playing right now is our overall culture-change effort," Whittinghill says. "Everyone is focused on how do we continue to evolve the culture in the direction . . . that Satya is asking us to go to."

With the latest annual report showing big gains in its cloud business, Microsoft has racked up some successes lately that could help fuel the internal shift Nadella wants, experts say.

"For the first time in a long time, I'm seeing Microsoft employees excited," says Kevin Oakes, CEO of the Institute for Corporate Productivity, a Seattle-based business research organization. "They feel like they're winning."

But the evolution won't be easy.

Read the full article at HREOnline.com.