Walgreens’ path to being a global model of integrating people with disabilities into the workforce began as a simple idea from one man. “It was never the intention to create a national, now a global, model—he was just trying to serve a need,” says Steve Pemberton, divisional vice-president and chief diversity officer, of Randy Lewis, a former Walgreens vice-president who headed up the company’s distribution centers and led Walgreens journey toward inclusion in 2002. 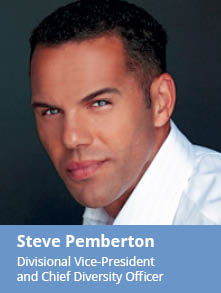 Lewis is the father of an autistic son, and at the time, served on the board of Best Buddies International®. He believed it was possible to make people with disabilities an integral part of the workforce and took his vision to the Walgreens board of trustees. They signed on, and it was full steam ahead. Lewis’s idea became ingrained as part of the Walgreens culture. Pemberton said, “He just thought that ‘talent’ and ‘disability’ could exist in the same sentence.”

Successful growth of the concept

The overarching vision of Walgreen’s initiative was the belief that it would be sustainable to provide the same standards, same work, same pay, and same performance measures to individuals with a variety of disabilities. That belief more than justified itself, with astounding results:
Walgreens expanded the concept to its retail division. The model was first piloted in Dallas/Fort Worth in 2010 and then spread to Houston, New York and nationally. Pemberton says, “We’ve had 500 candidates with disabilities through our program, and 66% have been successfully trained and placed in 100 stores in 16 markets.”

The organization has made some changes to its training programs and access. For example, Walgreens now uses more iconography in place of text in training workers, and that practice is expanding across various channels.

Pemberton suggests looking at the hiring of individuals with IDD not through the lens of a charitable activity but as an activity that is integral to business. “It’s an extension of the corporate character,” says Pemberton. Results are apparent in measures such as lower absenteeism and retention rates that are double the non-disabled employee population. “They have a deep commitment to doing the best job they can,” Pemberton says. And many individuals with disabilities have certain strengths that come from their circumstances, giving them the advantage of having overcome adversity.

Hiring individuals with IDD also increases customer loyalty. “Because of our investing efforts in employing individuals with IDD at the retail locations, customers often tell us that Walgreens has become their pharmacy of choice.” Pemberton says it’s an issue that cuts across the population and touches lives through family, neighbors, veterans and other people with disabilities. “Customers appreciate it. It’s instructive for people with disabilities who want to work and empowers them to do so.”

An additional benefit to the firm is extended employer brand awareness. Pemberton says that at least 100 companies have toured Walgreens’ distribution centers. And that often, there is the obligatory head nod as people readily acknowledge that hiring individuals with IDD is a nice thing to do, but they are looking for the ‘how.’

Pemberton’s experience tells him that companies’ perceived challenges in hiring people with IDD are typically larger than any actual challenges experienced. Many organizations fear there will be a sizable investment in training, safety and other issues. Following is his advice for firms that have not yet taken on this important initiative:

Pemberton says he hears many anecdotes that reflect the joy experienced by an individual with an intellectual and developmental disability receiving their first paycheck at the age of 35 or 40.

Parents of individuals with intellectual and developmental disabilities often worry about what the future will hold for their son or daughter when the parent is no longer able to assist them. Pemberton says there are many examples of parents saying they now feel comfortable that if they’re no longer available, their children are able to take care of themselves.

Walgreens website includes many success stories reflecting individuals with various disabilities who share their stories of the importance of inclusion.

Carrefour: The Ingredients for a Diverse & Inclusive Global Culture