The Role of Succession Management in Uncertain, Tumultuous Times

The COVID-19 coronavirus pandemic quickly and widely altered the talent priorities for many organizations, from delayed or cancelled training programs to pressing pause on various other initiatives to focus on the urgencies of each day. But as the weeks grew into months, many of those organizations have by now gotten their feet back under them in areas such as performance management, training, succession, and more.

In early 2020, the Institute for Corporate Productivity (i4cp), in partnership with HR Executive magazine and HRCI, collected data from over 1,500 HR executives at organizations employing at least 1,000 people on their approach to succession planning and management.

In June 2020, i4cp captured additional follow-up data from a select group of those original survey respondents to determine whether and how the COVID-19 pandemic and the social unrest that followed the death of George Floyd would impact their approaches. The results are illuminating as to where organizations stand today and what succession will look like going forward.

It is likely that in March of this year, few organizations would have cited succession as an immediate priority (including most of those that had previously set it as a priority for 2020.)

But what about now, four months later?

That said, organizations for the most part aren’t rushing to make big changes to their succession management strategy.

We asked the follow-up survey respondents about the extent to which the changes driven by the COVID-19 pandemic to how organizations operate in turn alter the strategy related to succession management—only 14% said to a high or very extent. While 37% indicated a moderate extent, another 34% said there will be small changes, and 8% said no changes are coming at all in their organizations.

Even a moderate scope of change could in some cases be important, so we asked survey participants to describe the kinds of changes their organizations are making (or soon will make) to their succession processes due to the COVID-19 pandemic.

Not surprisingly given the past few months, the most common response is an increased focus on short-term/emergency needs and the value of contingency planning. A few respondents said that for budgetary or other reasons they are streamlining the succession planning process to focus only on the most senior or highest-impact roles, but more indicated that the pandemic period has made clear that they need to apply their succession process to more roles in the organization.

Several indicated that more attention is needed to leadership development programs, and the need to raise the visibility of bench risk where it exists in the organization. A couple of respondents noted plans to switch to a talent pool approach, rather than succession that focuses on individuals for specific positions, a tactic our survey in January found to be a next practice (meaning far more high-performance organizations are adopting it than low-performers, even though overall adoption remains low).

The increase in remote work is leading some organizations to reassess the necessity of relocation of leaders within regions to be in the same office as their teams, thereby broadening the pool of potential successors. And circling back to the issue of succession priority, one respondent frankly noted that succession is moving up “the list of priorities now that there are realized reasons to conduct it.”

The pandemic is clearly also impacting how succession candidates’ readiness is evaluated, as all of the following characteristics were cited by a significant number of respondents as those they anticipate will see an increase in importance:

New emphasis on diversity and inclusion

The pandemic is of course not the only recent event leading to changes in succession management processes. We asked participants to what extent they believe the widespread social unrest in response to the death of George Floyd and others will alter their organization’s succession management strategy going forward. While only 7% indicated it would alter it to a high or very high extent, 31% said it would impact it to a moderate extent.

We then asked: “Given the commitment (or recommitment) your organization has made to diversity and inclusion as a result of the social unrest regarding racial inequities, which of the following practices will your organization emphasize significantly in order to ensure greater diversity at leadership levels at your organization?” No one practice listed garnered over 50% of the responses—an indication that there are many steps organizations can take to address issues of low representation of Blacks (and members of other underrepresented groups) in leadership roles.

The most common tactic (46%) cited is reviewing job requirements and qualifications for bias (e.g., like-me traits, schools/universities sourced, gender biased leadership traits). A close second (44%) is incorporating diverse talent development and succession requirements into all people managers’ performance goals. The other two approaches cited by over a third of respondents are broadening the sourcing of talent for succession (e.g., eliminated requirements that limit applicants and potential talent pools) and providing targeted development (e.g., sponsorship, coaching, mentoring, and/or training) of individuals in underrepresented groups.

See the chart below for more interesting approaches organizations are leveraging to tackle this important issue. 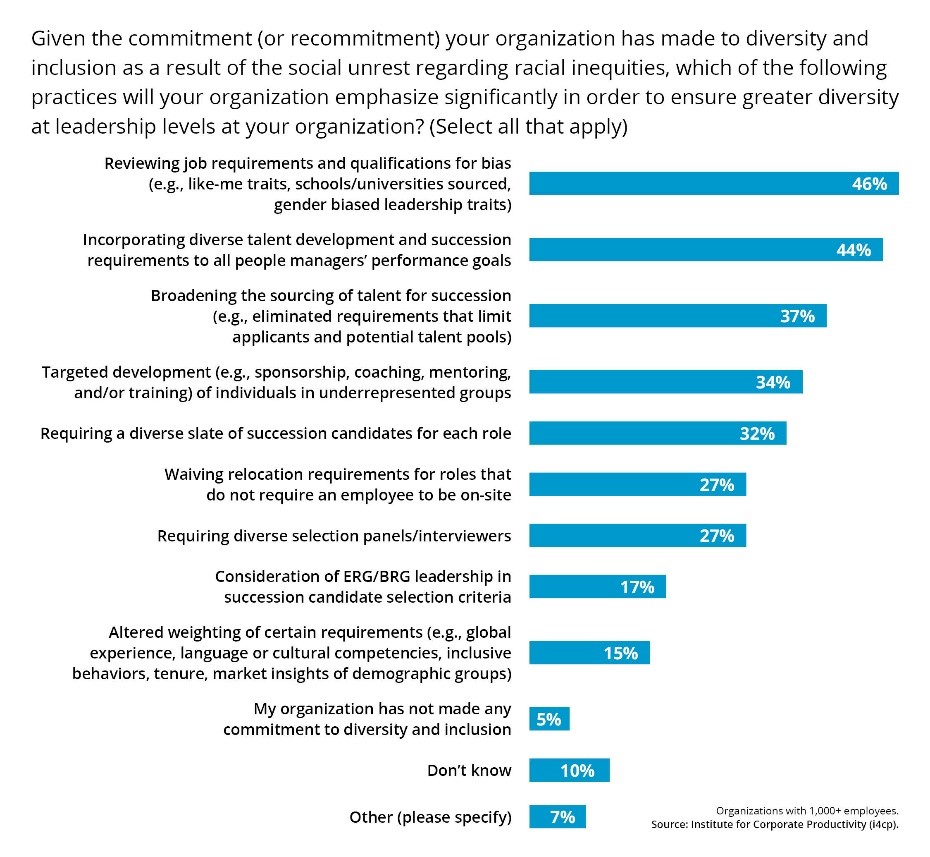 Each week over the remainder of the summer, we’ll publish more research results, analysis, and case studies from our Next Practices in Succession Management study (available exclusively to i4cp members).

Around the World in One Virtual Workday: Developing Strong Global Team Leaders

Employees Leaving Due to a Toxic Culture? Time to Renovate.

DEI NEXT PRACTICES: Allstate is Disrupting the Status Quo 9/22

How is the Dept. of Health & Human Svcs. Getting Hybrid Work Right? 9/15