The Hawthorne Effect & the Benefit of Shaking Things Up

The Hawthorne Effect is one of the best known and controversial studies ever conducted on workforce productivity. Named after a series of experiments that took place at the Western Electric factory in Hawthorne, a suburb of Chicago in the 1920’s and 30’s, the Hawthorne plant employed about 35,000 people & supplied telephone equipment to AT&T.

While what actually happened remains debated, the lore of the study is interesting. Conducted for the most part under the supervision of Elton Mayo, an Australian-born sociologist who eventually became a professor of industrial research at Harvard, the experiments were originally intended to study the effects that lighting levels had on employee output.  One day the lighting in the work area for one group was turned up and made much brighter, while another group's lighting remained unchanged. The result was that the productivity of the more highly illuminated workers increased much more than that of the control group.

The researchers began to make other changes to select groups (working hours, breaks, etc.), and in most cases productivity improved when a change was made, even when the lights were dimmed. Supposedly by the time everything eventually had been returned to normal, productivity was at its highest level, and even absenteeism had plummeted.

The studies didn’t actually gain notoriety until the 1950’s, when different researchers concluded that it wasn’t the changes in lighting or other physical conditions that affected workforce productivity. Instead, it was because employees felt for the first time that someone was actually paying attention to the work environment, and the workers themselves.

While many researchers since have shed doubt on various aspects of the now almost 100-year-old experiments, the original idea that constant change can improve productivity is a fact that our research shows has merit. 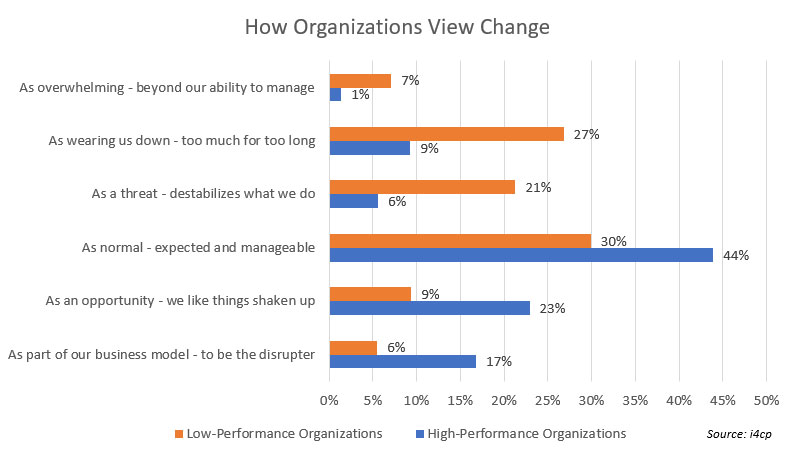 In a brand new study i4cp just conducted on Organizational Agility, we found that high-performance organizations (those with higher levels of revenue growth, profitability, market share, and customer satisfaction) clearly embrace change more so than low performing companies. In fact, those top companies are far more likely to say they view change “as an opportunity – we like things shaken up,” or that it is “...part of our business model – to be the disrupter.”

If your organization views change as a threat, or something that wears you down, there’s a good chance you work for a low-performing organization.

We’ll be releasing detailed data soon on both strategic and tactical initiatives organizations can take to create an agile workforce, but often it all starts with cultural attitude. Moving your culture from one that views change as something that happens and needs to be managed - to a culture that embraces and actually induces change - is a path to ensuring the organization becomes a disrupter instead of disrupted.

Kevin Oakes is the CEO of the Institute for Corporate Productivity.