More than 1/3 of Organizations Impacted by Travel Ban

Few organizations were prepared for the January 27th executive order restricting entry to the U.S. by travelers from seven majority Muslim countries and the resulting days of uncertainty unfolding at international airports across the U.S. 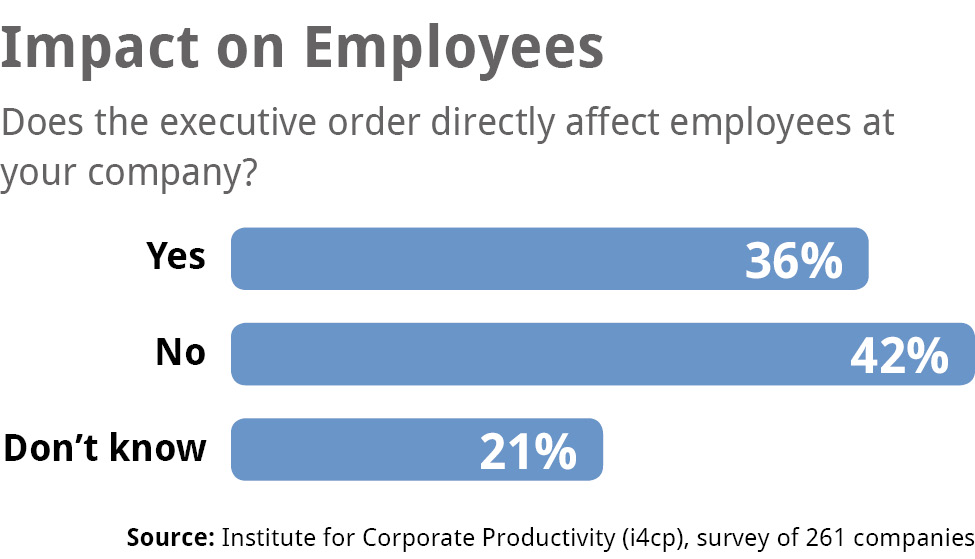 Just a few days later, with the order still in legal limbo, more than one-third (36%) of organizations surveyed by the Institute for Corporate Productivity (i4cp) said they had employees directly impacted by the travel ban, while others (21%) were still scrambling to make that determination.

In a follow-up briefing hosted by i4cp last week with senior executives from among its membership, many of the concerns voiced were longer-term. Uncertainty about where the U.S. may be headed in terms of immigration policies and their potential impact on these organizations’ needs to leverage the global workforce, and, ultimately, the ability to adapt and innovate in a time of accelerating global change, dominated the conversation.

Within a week of the signing of the executive order, nearly 100 companies, including many of the largest global tech companies, i4cp members among them, such as Intel, Microsoft, Apple, Netflix, and Uber, responded by joining in the filing of a brief in support of a lawsuit against the travel ban filed by the state of Washington.

And tech companies remain understandably concerned about possible changes in H1 Visa regulations; about two-thirds of the workers in computer and mathematical professions in the California-based tech industry were born outside the U.S., according to the Silicon Valley Institute for Regional Studies. 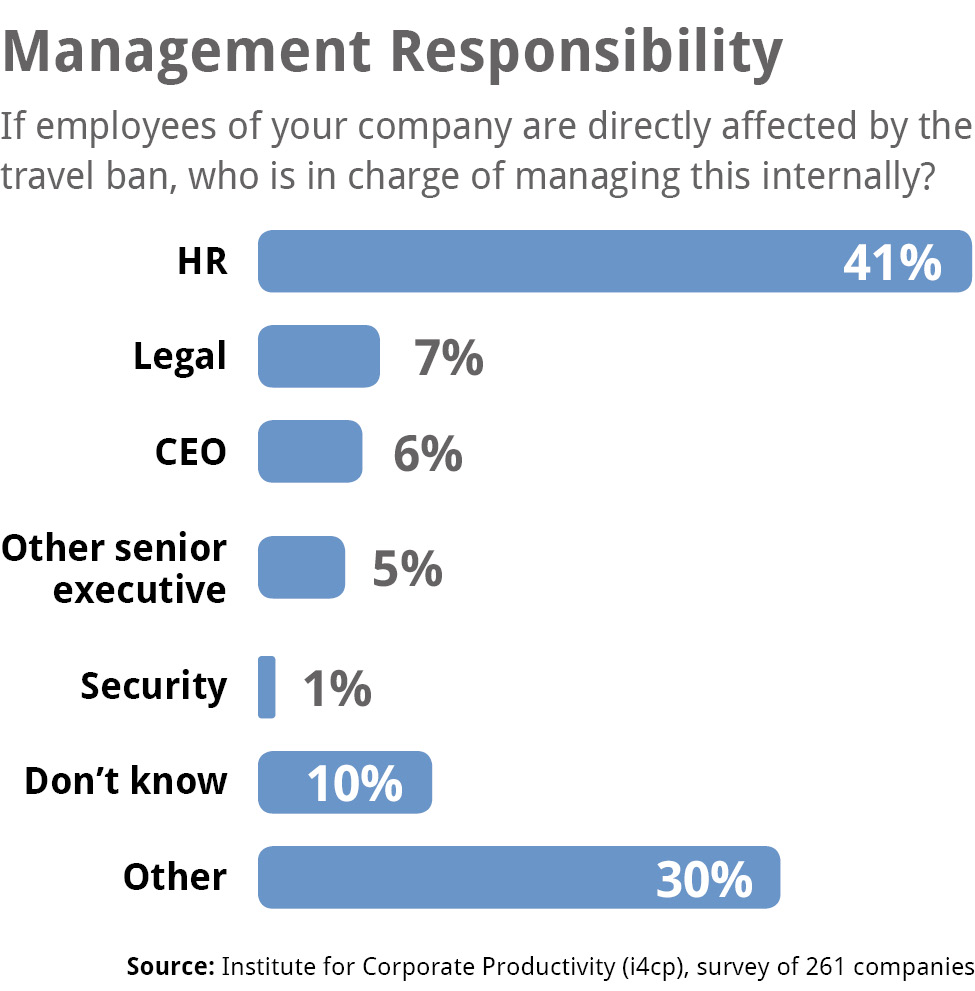 The i4cp Survey: Business in Limbo

Last week’s i4cp survey drew 263 responses from a cross-section of national, multi-national, and global corporations, mostly Fortune 1000 and Global 1000 companies and large governmental agencies. Some reported that they are simply unsure of impact of the travel restrictions because of lack of transparency in their global contract workforces, which are managed by vendors.

While some respondents lauded the executive order for protecting the safety of employees, others drew attention to its potentially negative impact on the recruiting and motivation of a diverse, inclusive global workforce, a clear illustration of the polarization of views and reactions.

HR is Taking the Lead 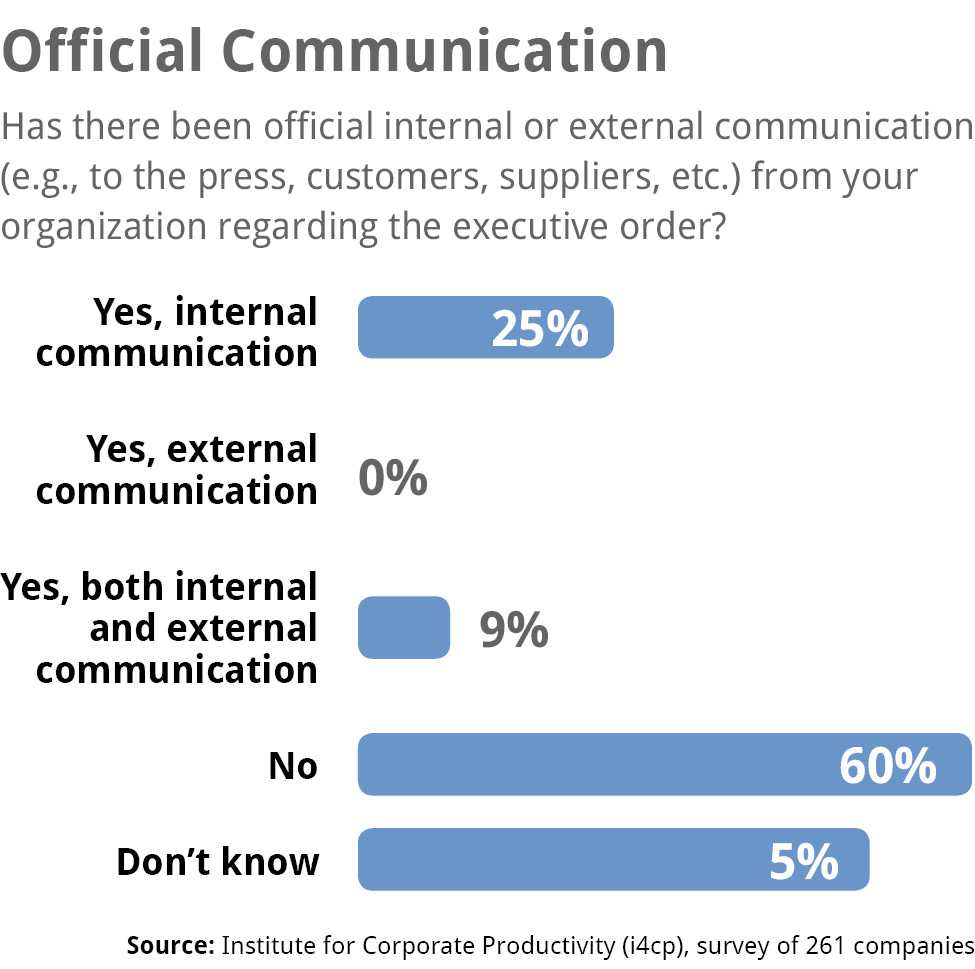 In nearly 41% of organizations, human resources is taking the lead in responding to and navigating the travel and immigration ban. Often this is in conjunction with legal teams responding to the needs of individual employees. In a few cases, companies reported that they have multi-functional ‘SWAT’ teams in place responding to the situation. And nearly a third said they are providing legal assistance to affected employees and their families. 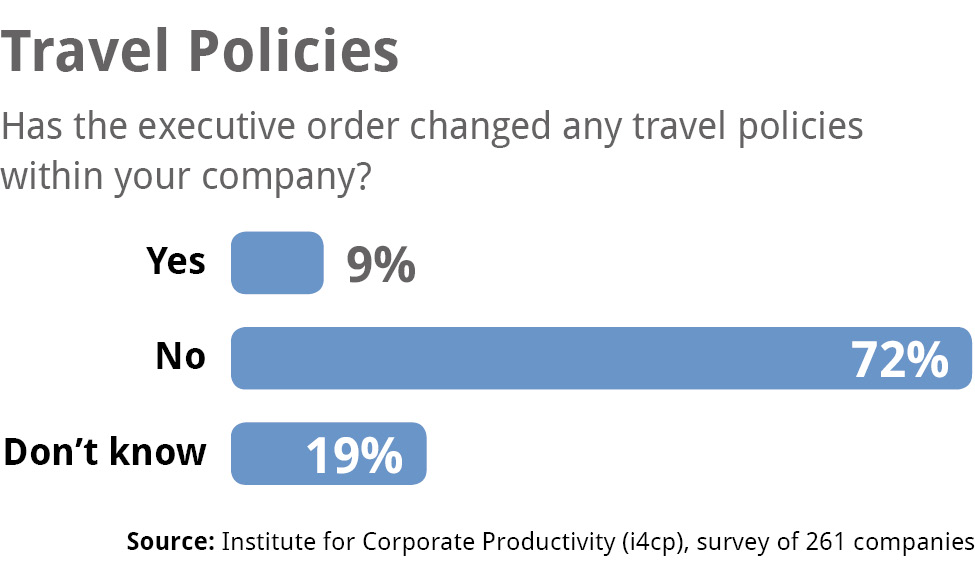 Only 9% of the companies surveyed reported that they are making changes in their current travel policies. These include restrictions on traveling inside or outside the U.S. for employees from the restricted countries. Several organizations noted that they are not permitting any of their employees to travel to the seven restricted countries. Companies also reported stepping up their documentation and record keeping of passports and nationalities of employees.

Amy Armitage is the director of i4cp's member research programs.