It’s not news that Republicans and Democrats generally view the U.S.’ response to the COVID-19 pandemic quite differently, but it didn’t start out that way. In the early days of the crisis, many thought it would bring unity (we’re all human and in this together). As we know now, the pandemic quickly divided the U.S. population along political affiliations. A recent CBS poll highlighted just how deep that polarization has become when they published startling differences in perception of deaths due to coronavirus, among other statistics.

In the poll published on August 23, they asked 2,226 registered voters if the number of U.S. deaths from coronavirus has been “acceptable.” Nearly all (90%) of Democrats said it was not acceptable, vs. 10% who said it was. Republican responses were quite different: 57% said the number was acceptable, vs. 43% who said it wasn’t. Another surprising dichotomy showed 73% of Republicans thought the U.S.’ dealing with the coronavirus was “going well” vs. just 38% of all voters.

The same poll, which has a margin of error of 2.4%, shows stark differences in perception on other areas organizations are wrestling with. For instance, 81% of Republicans responded that the recent attention to discrimination was “too much” vs. just 12% of Democrats. More than half of Democrats thought more attention was needed, vs. just 6% of Republicans. Like all polls, these data points represent a single point in time and require further analysis to derive a clear understanding of their true meaning.

However, the CBS poll and several others showcase the dilemma facing most organizations today as they respond to the pandemic, social unrest, and other issues of the day—the reaction is likely to be quite different in the workforce depending on individual political affiliation.

Considering these issues and how they affect the upcoming election, we were curious if CEOs are taking a political stance, and if the looming election is affecting workforce productivity and overall culture. 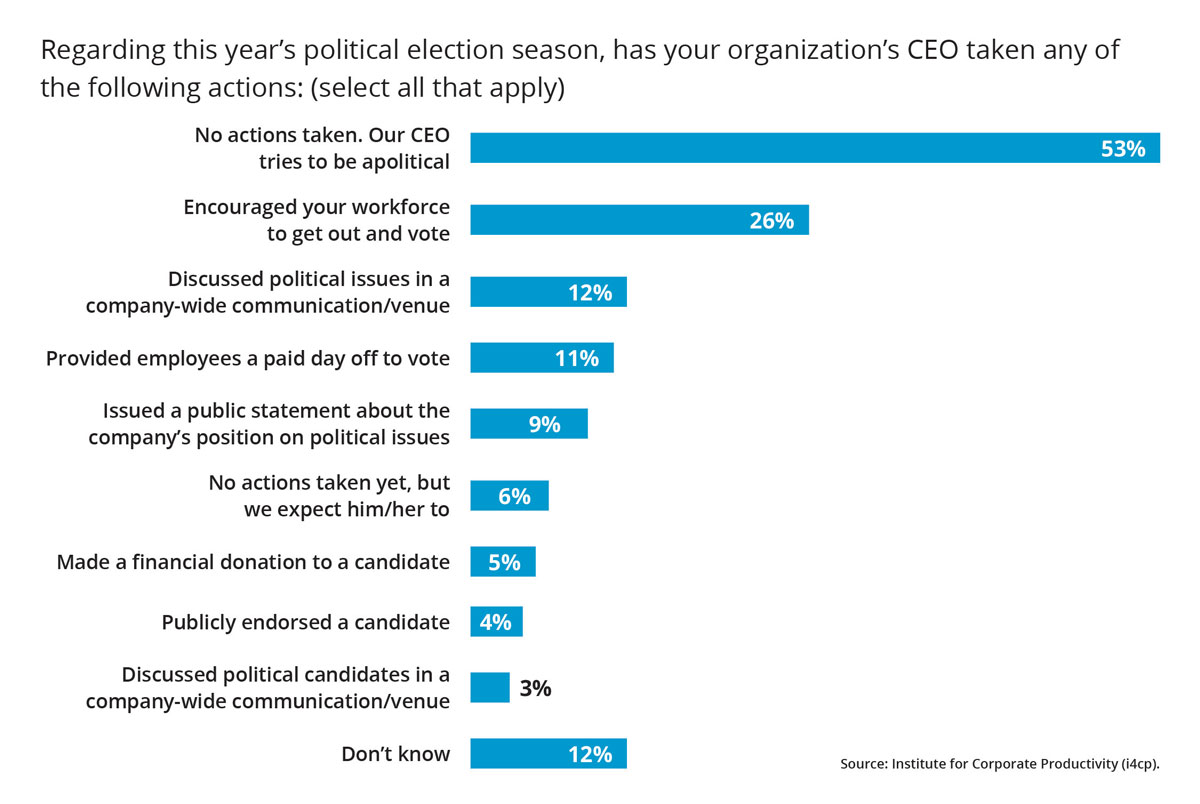 While conventional wisdom tells us that a strong and clearly articulated purpose and set of principles that communicates clearly where a company stands is what job seekers and consumers want today, our recent poll would suggest that most companies and their leaders are still unwilling to share their views publicly.

Not all companies feel this way, however. Patagonia—always a challenging company to compare against because its culture is so unique—has done it a little differently.

Ahead of the 2018 midterm election, Patagonia became one of the first consumer brands ever to make the endorsement of a specific candidate part of its brand marketing. In support of their mission that “Patagonia is in business to save our home planet,” the company endorsed two candidates, Representative Jacky Rosen in Nevada, and Senator Jon Tester in Montana, both Democrats, for their stances on protecting public lands. They promoted the candidates on the website, across social channels, and in customer emails. Both won their elections, and Patagonia’s support was called the determining factor by some.

That’s unlikely to be matched in the short term by most companies. Patagonia screens new hire candidates for and primarily attracts outdoor enthusiasts who support environmental causes. Their customers generally reflect their workforce, and as a result the company’s employer brand and consumer brand are about as aligned as you’ll ever find.

For many other companies, the workforce (and the customer base) often possess a wide variety of interests, beliefs and political leanings, and as a result the organization is more apt to take a middle road when it comes to supporting political issues or candidates.

This is beginning to change. Just in the last couple of years we’ve seen several iconic brands including Nike, Levi’s, Gucci, Airbnb, Ben & Jerry’s, Dick’s Sporting Goods, and others take public stances on a variety of social issues. “Brand political activism” is a trend, primarily because consumers are demanding it. Over 60% of consumers want companies to stand up for the issues they are passionate about and another 66% think transparency is one of a brand’s most attractive qualities.

But in today’s polarized world and “cancel culture,” that step is a giant leap for most—the risks can appear to outweigh the rewards. Recently President Trump tweeted, “Don’t buy GOODYEAR TIRES - They announced a BAN ON MAGA HATS. Get better tires for far less!” in response to leaked photo of an internal PowerPoint slide. Goodyear denied that they were targeting MAGA hats, and later released a public statement which said the company asks its associates to “refrain from workplace expressions in support of political campaigning for any candidate or political party, as well as similar forms of advocacy that fall outside the scope of racial justice and equity issues.”

This slippery slope so far seems to be traversed just fine internally. Our same poll found that typical political debates among co-workers, even in a virtual work environment, are not having much effect, and frankly just aren’t happening. Almost 60% reported that there are no debates happening, while a mere 4% said that the debates that are happening are disruptive to the culture (17% said they are “no big deal”). Another 12% said the company—like Goodyear—has a specific policy banning political debates.

It won’t be surprising to see attitudes and rhetoric heat up as we approach the November elections.

But for now, it appears leaders and employees are staying away from public stances. Yet, the attitudes underneath are as polarizing as we’ve seen, and corporations that are rolling out return-to-office plans, responses to social injustice and other issues need to be cognizant of the drastically different points of view of employees – nobody seems to see these issues the same.

If you are struggling with all of this, take solace in the fact that today is a more complex time than most of us have ever seen. Post-election, post-pandemic, perhaps attitudes will change. As one respondent wrote: