How Disney Disrupted its Industry by Disrupting Itself

The Walt Disney Company is the latest to prove that large companies can disrupt themselves and reap immediate reward for doing so. Disney announced on July 12 that its latest Marvel Cinematic Universe (MCU) film, Black Widow, brought in $80 million from its initial domestic theatre release, $78 million internationally (not yet including China), and another $60 million in video-on-demand sales on Disney+ Premier Access. That last figure is critical, as 100% of the revenue goes to Disney, as opposed to being split with theatre operators.

There has long been fear in the movie industry that simultaneously releasing a film via streaming and in theatres would see the former completely cannibalize the sales of the latter. Years ago, then Disney CEO Bob Iger decided to make an enormous bet on streaming, even though doing so might disrupt part of Disney's existing business model. The Disney+ subscription service fast became a success, growing to over 100 million subscribers in little over a year, and garnering 71 Emmy nominations—nearly half of Disney’s total nominations from across its portfolio (which includes Hulu, ABC, FX, and more.)

And then came the past year+ of COVID-19-related lockdowns, which led to the halt of some movie production schedules, the delay of many film release dates (including Black Widow), and the rethinking of the timing of how movies are released to viewers. Disney is both a movie producer and a streaming service, so it bravely took the plunge—and the results speak for themselves. That’s not to say that all movies from all producers and all streaming services will see equally impressive results—Black Widow is after all part of the extremely popular Marvel franchise, Disney has a fast-growing streaming service, etc. But this success, with Disney surprising many by sharing the broken-out revenue numbers, certainly is a milestone for the industry that will lead to further experimentation in how movies are released and consumed.

Disney’s risk taking is especially interesting because such actions remain rare. In business, words like “disruption” and “agile” usually conjure up smaller, newer, more nimble companies that arise in an industry and disrupt both business models and the established players. Companies such as Uber and Lyft in transportation or Robinhood in stock trading are examples of disruptive innovators. Other examples include Amazon and Netflix—both started small, had success via their disruptive innovations, and later grew to become very large. In the case of Amazon, the disruption is continuous as it enters one new industry after another.

On the flip side, the corporate landscape is littered with examples of once dominant companies that failed in the innovation race—they didn’t respond well to change or outside disruptors. Nor were they willing to disrupt themselves by introducing or supporting new technologies or business models that would compete with their established products or services. Kodak and Blockbuster Video are two classic examples, but there are many others, some still fighting to survive today. 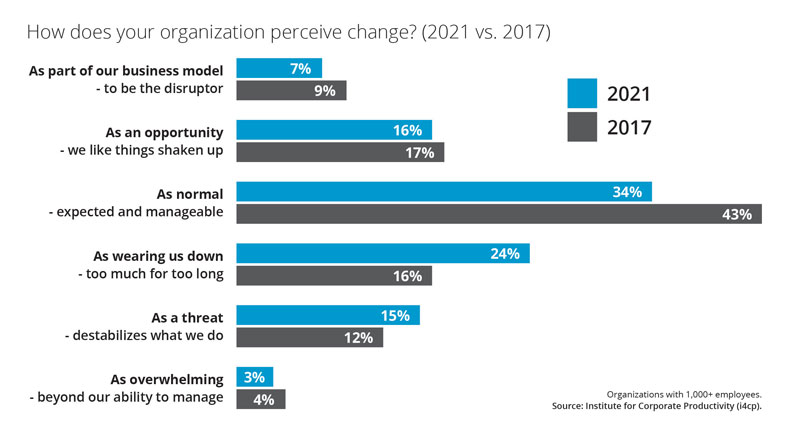 Research conducted by the Institute for Corporate Productivity (i4cp) has found that it is uncommon for organizations to view change as a positive, and those that consider themselves to be disruptors are rarer still. In the 2017 study The Three A’s of Organizational Agility: Reinvention Through Disruption, only 9% of participants surveyed from larger organizations (those with >1,000 employees), said that change is perceived “as part of our business model, to be the disruptor.” Another 17% reported that their organizations view change as an opportunity; 43% said change is viewed in their companies as something normal, expected, and manageable.

When i4cp revisited this question in June 2021 as part of its study on workforce readiness, all three of these numbers declined. Those who said that change is viewed in their organizations as part of their business model—to be the disruptor themselves—dropped to 7%. Those indicating that their organizations perceive change as an opportunity ticked down slightly, while those who said change is viewed as normal, expected, and manageable plunged from 43% to 34%. After the past year of massive change, far more reported their organizations see change as wearing them down, as being too much for too long (24% this year vs. only 16% in 2017); slightly more reported this year that change is viewed as a threat, as something that destabilizes what they do (15% vs. 12% in 2017).

What is interesting about both the 2017 data and the results of the latest survey is that a correlation exists—and has gotten stronger—between how organizations perceive change and their overall market performance, as determined by i4cp’s composite index of revenue growth, market share, profitability, and customer satisfaction. Participants from high-performance organizations in 2017 were 3X more likely than those from lower performers to indicate their organizations perceived change as part of their business model (to be the disruptor rather than to be disrupted, so to speak).

In 2021, that difference is now 5X, with 20% of survey participants from high-performance organizations indicating that their organization see themselves as disruptors, versus only 4% from low-performing companies. In contrast, 60% of participants from low-performing companies report that change is currently perceived as either wearing them down, as a threat, or as completely overwhelming.

Thomas Stone is a senior research analyst at i4cp