How are organizations acknowledging heightening awareness and evolving understanding of gender, identity, and orientation in the workplace?

For example, are leaders using pronouns in their email signatures? Is there understanding about misgendering? Are employee groups being leveraged to help navigate all of this? And, what about HR? Is HR adjusting by expanding beyond the typical M/F labels in policies, practices, and metrics?

These questions and others were posed recently to 150 HR leaders by the Institute for Corporate Productivity (i4cp). Encouragingly, we found that many larger organizations (61% of those that employ 1,000+) have taken some measures (or plan to soon) to recognize gender fluidity.

Among the findings of the survey, we noted that the most popular actions organizations plan to take in the coming year to address gender fluidity have a distinct external focus including:

Of course, asking others about their pronouns can be awkward; you might wonder if it’s even okay to ask someone directly what their pronouns are—the answer is a resounding “yes!” according to one advocate who writes frequently about this topic, and offers the following advice:

This is an important skill to cultivate. We have probably all heard this, but there are plenty of times we feel awkward asking, and so we don’t. But it’s never too late—ask at any point during the conversation. It’s not a faux pas if you have to stop in the middle of a sentence—just ask:

“Sorry, what are your pronouns?”

“I didn’t get your pronouns, what are they?”

“Will you remind me your pronouns please?”

Why is identity in the workplace an important topic? Because conversations about gender and identity—the very essence of the much talked about “bringing our whole selves to work”—seem to be everywhere lately. 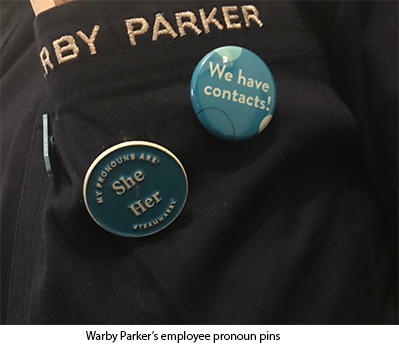 Recently, veteran actor Billy Dee Williams made headlines when Esquire published an interview in which Williams talked about embracing gender fluidity, describing himself as both masculine and feminine, not feeling that he conforms unequivocally to male or female identify.

Identity is the centerpiece of the new Showtime comedy series Work In Progress, which explores the trials of Abby, a self-described “queer dyke” who is often mistaken for a man. Abby works in a corporate environment, and some of the most cringe-inducing scenes are of workplace exchanges between Abby and a colleague who is clearly rattled by her inability to grasp Abby’s gender identity, gender expression, and orientation—her intersectional “otherness.” The colleague’s approach comes off equal parts condescending, judgmental, and nervously leery.

In addition to addressing the workplace challenges of non-conforming individuality, the show does a great job of reminding viewers that gender ambiguity—and the awkwardness many people feel in response to it—is nothing new.

A major subplot of the show is Abby’s fraught connection to comedian Julia Sweeney’s 1990's Saturday Night Live character, the gender ambiguous “Pat.”  The punchline of every SNL skit featuring “Pat” was that none of their co-workers could figure out Pat’s gender. Abby confides in a friend that “Pat” had a deep, negative impact on her personally, making her the butt of jokes to include being mockingly called “Pat” during her college days

The chance meeting of Abby and Sweeney (playing herself) and their developing friendship offers the audience a fly-on-the-wall view into both Sweeney ruefully exploring the impact of her character and the many regrets she has in hindsight, and the pain, rage, and exhaustion of Abby, who has been navigating a world insistent on forcing her, a nonbinary person, into one of two binary gender role boxes—female or male?—with no other options.

Popular culture is one thing—what about the workplace? 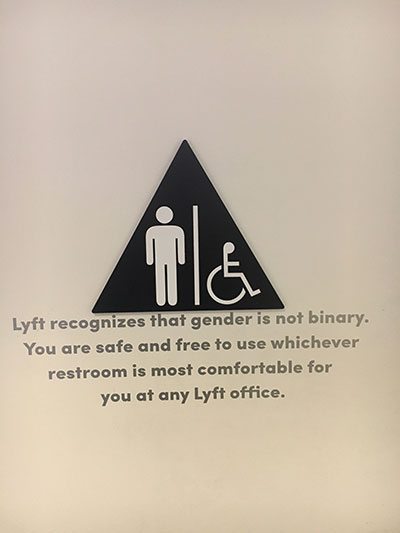 In thinking about the workplace and the importance of everyone feeling seen and accepted for who they are, the role of human resources has never been more pivotal or challenging, especially in an era in which we are all (hopefully) learning more every day about what it means to be gender nonbinary or trans, for example, how deeply personal and consequential identity is, and how damaging insensitivity to this can be.

HR most definitely needs to ensure that acknowledging and accommodating gender fluidity is about so much more than adding a third (or fourth) check box option to standard forms. But building and sustaining a culture in which feeling a sense of belonging is the real deal rather than a buzzy catchphrase takes a lot of commitment and hard work.

So, what are other ways that organizations are responding (or not) to the issue of identity in the workplace, and what’s ahead?

Among those survey participants who told us that their organizations recognize the need to respond to gender identity concerns, the following practices make up the top five that are currently in place or planned to be within the year:

Organizations are not yet widely including gender identity (e.g., nonbinary/trans) in their employee demographic tracking—just 28% currently do so. But some said that their organizations are exploring ways to incorporate this into their tracking soon, noting that they anticipate that the U.S. Equal Employment Opportunity Commission will eventually amend its annual EEO-1 reporting form to include options for nonbinary individuals, and they want to get out in front of that by starting to track this data internally now.

Leverage employee groups to help build a culture that welcomes everyone

The numbers are a little bit better when we looked at larger employers (again, those that employ 1,000+ people).

Clearly, larger organizations recognize the value and power of LGBTQ employee groups, which can be absolutely essential to helping to address gender and identity issues in the workplace in real time.

In these companies, employee groups are overwhelmingly (70%) relied upon to identify and surface important issues and needs and provide leadership, guidance, and support in addressing them through advocacy, education, and policy change. 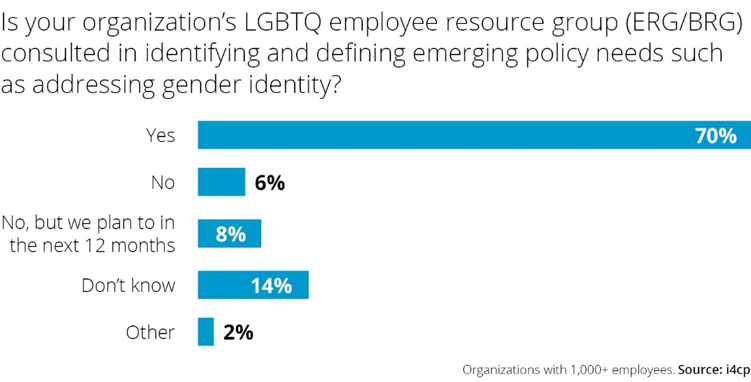 LGBTQ employee groups can also help (if they choose to, this should not be expected) to provide guidance on decisions such as where to begin incorporating the usage of pronouns, for example in email signatures, social media bios/profiles, on business cards, conference nametags, in introductions at meetings or workshops, speaking engagements, etc.

It is of course we who decide who we are, how we identify, and how we express our identities. But in order to truly thrive at work, most of us need to feel comfortable being who we are. Employers need to figure out a way to make this possible.

View the results of the survey here (i4cp member's only).