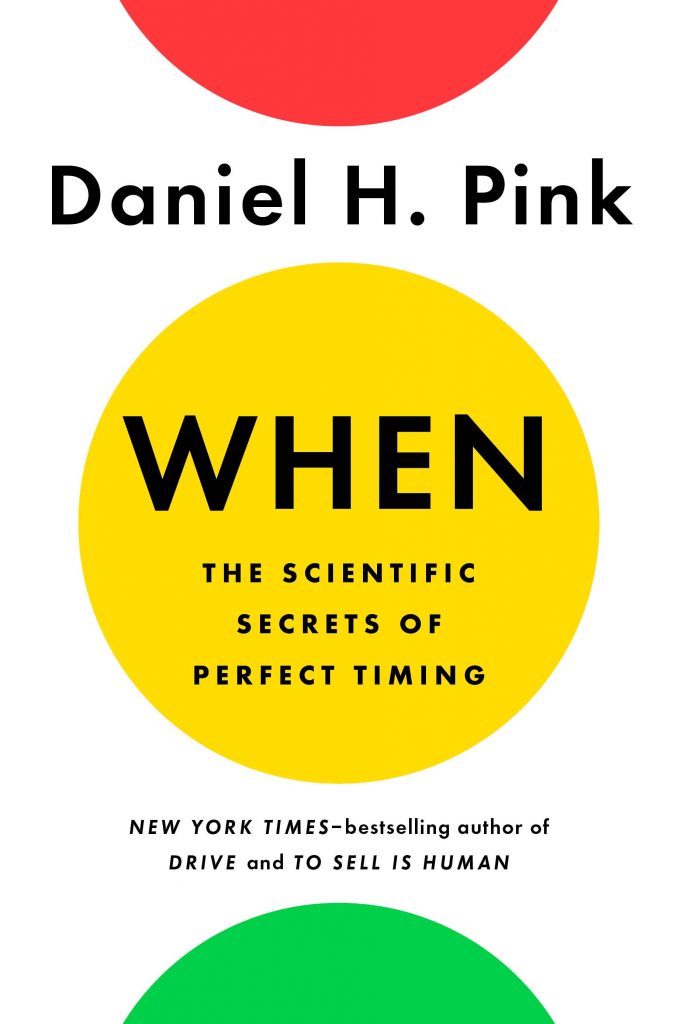 Perfect timing isn’t just a matter of having serendipity and a bit of good luck on your side.

Dan Pink, thought leader and author of the New York Times bestseller “ A Whole New Mind” and the #1 New York Times bestsellers “ Drive” and “ To Sell is Human,” and several other books on leadership and the workplace, has reached this conclusion after analyzing more than 700 research studies across more than a dozen fields—including economics, social psychology, endocrinology, and cognitive science—over the course of two years.

In his latest book,  “When: The Scientific Secrets of Perfect Timing,” which goes on sale this Tuesday, Pink describes how improving timing—which he says is more science than art—can help individuals excel in their personal lives. At i4cp’s 2018 Conference: Next Practices Now (March 26 – 29, and every attendee will receive a complimentary copy of Pink's book), he will explain how the secrets he shares in his book help separate high-performance organizations from low-performance ones.

The authors whose work Pink studied didn’t necessarily communicate with each other as they carried out their studies. But many of the researchers asked similar questions, and frequently found that top organizations take the timing of work seriously, says Pink.

“And by putting together all their findings, I ended up with a huge batch of evidence that allows us to make systematically better ‘when’ decisions.”

A key step toward making better when decisions is developing a firm grasp of group dynamics within your organization.

A team reaching a project’s midpoint, for example, can find itself either invigorated or exhausted as it turns the corner, says Pink.

“We lose motivational energy. Other times, though, reaching the midpoint fires us up. It can instill a sense of urgency that I call the ‘uh-oh effect.’ Knowing the difference can make a world of difference,” he continues, adding that HR and organizational leaders must also give thought to how work groups synchronize.

“We now know—from studies of rowers, basketball players, even lunch deliverers—that for groups to synchronize in time, they need a clear boss, feelings of belonging, and a sense of purpose.”

Pink points to the timing of quarterly earnings calls to illustrate the importance of perfect timing on an organizational level.

“It turns out that, in public companies, quarterly earnings calls held in the afternoon are more negative than those in the morning, even controlling for the fundamentals of the news being reported,” he says. “The effect is so large that afternoon calls temporarily depress a company’s stock price. So public firms, no matter how they’re doing, are better off scheduling earnings calls earlier in the day.”

When Work Gets Done

The timing of tasks has a significant effect on individual performance as well, says Pink. He urges CHROs to help foster environments in which certain kinds of work is done at certain times of day.

Most employees, for instance, do better at analytic tasks such as writing a legal brief or administering an audit in the morning, says Pink.

“So, it becomes important not to lard up peoples’ schedules with meetings and email during these optimal periods,” he continues. “Likewise, most people tend to do better at brainstorming and so-called insight tasks much later in the day. So creative work should be moved to a different block of time.”

“While about 80 percent of the workforce are morning people, or at least morning-ish people, some folks are owls rather than larks,” says Pink. “And most work schedules disadvantage these owls, even though they’re often some of the smartest, most creative people.”

Ultimately, Pink’s presentation figures to offer guidance on how achieving perfect timing can help an organization get the most out of these employees. Reaching that goal, he says, also includes learning when these intelligent, imaginative and hard-working individuals need to take a breather.

“We need to take breaks more seriously. About 15 years ago, we thought people who pulled all-nighters or ignored sleep were heroes,” he says. “Then the science of sleep showed us that they’re actually fools. Now the science of breaks is following the same trajectory. It’s showing that skipping breaks is foolish.”