The Institute for Corporate Productivity’s (i4cp) recent study, Culture Renovation: A Blueprint for Action, reveals a classic polarity at play in successful culture change initiatives: successful efforts are characterized by strong top-down (CEO level) leadership, but just as importantly by a co-creation mindset, with broad and meaningful engagement/ownership on the part of employees (i.e., bottom up, or middle out.)

In fact, one specific action identified in i4cp’s Culture Renovation™ research as critical to successful culture change is using organizational network analysis (ONA) to identify and engage hidden influencers who can be key in driving the change process.

Bushe is the Professor of Leadership and Organization Development at the Beedie School of Business at Simon Fraser University (Vancouver, Canada), one of the top 100 management research schools in the world.

His career spans over four decades of transforming organizational structures and culture and processes from command and control toward more collaborative work systems. He is an award-winning author of over 100 papers and three books on organizational change, leadership, teams, and teamwork.

His recent book, co-edited with Bob Marshak, Dialogic Organization Development: The Theory and Practice of Transformational Change has been called revolutionary. His newest book, The Dynamics of Generative Change, was published in late 2019.

If you are not familiar with the term “Dialogic OD,” it was coined by Drs. Bushe and Marshak to characterize a set of transformational change practices (e.g., appreciative inquiry, open space technology, liberating structures, and many more) driven by carefully structured participative events and a mindset that views organizations as ongoing conversations influenced by who talks to whom about what. Dialogic OD is also a theory about why and how these transformational change practices work.

The research that we've done on Culture Renovation™ and the conversations we're having with i4cp members suggest that companies are moving away from a top down linear model of change management because those methods are not sufficient to address the increasingly complex, constant, and rapid nature of change today.

What we're noticing is a tendency to instead leverage conceptual guiding principles to govern change initiatives, using a mash up of design thinking, agile methodologies, and other approaches to stakeholder engagement. What have you observed in your research in that regard?

We've seen exactly what you're describing, and I've actually just finished a book that is an attempt to take the mash up and give it some structure. Bob Marshak and I have developed what we call the Generative Change model, as opposed to the planned change model. I agree with you. I think companies are moving away from planned change and they're moving toward what we're calling generative change.

We're trying to make it easy to understand and I think we've done that. For example, I was teaching Dialogic OD in Saudi Arabia to mining executives recently. I had to figure out a way to make it make sense to them so they could step into it. And it worked, and I realized if it makes sense to them it can make sense to everybody. I found a way to talk about dialogic OD to your average person in a way that allows them to get the dynamics of generative change.

Tell us more about how you make the concepts of dialogic OD more accessible to leaders who aren't OD practitioners or well versed in the theory and practice of organizational change and transformation.

I just gave them [the mining executives] some distinctions between different types of problems and ways of thinking about them, and a step-by-step model. These diagrams show the difference between planned change and generative changes: 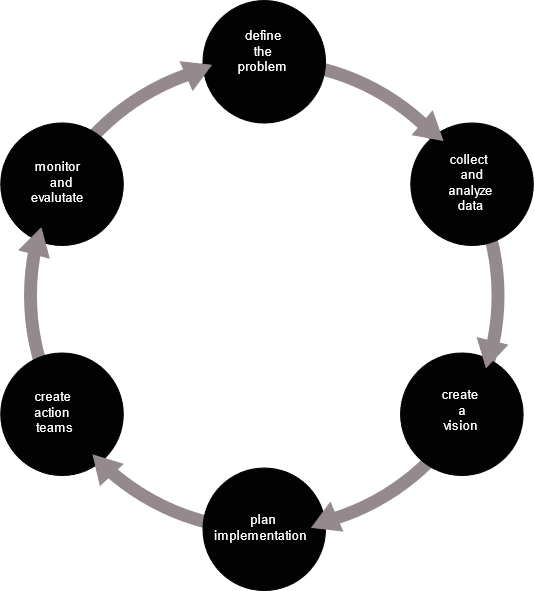 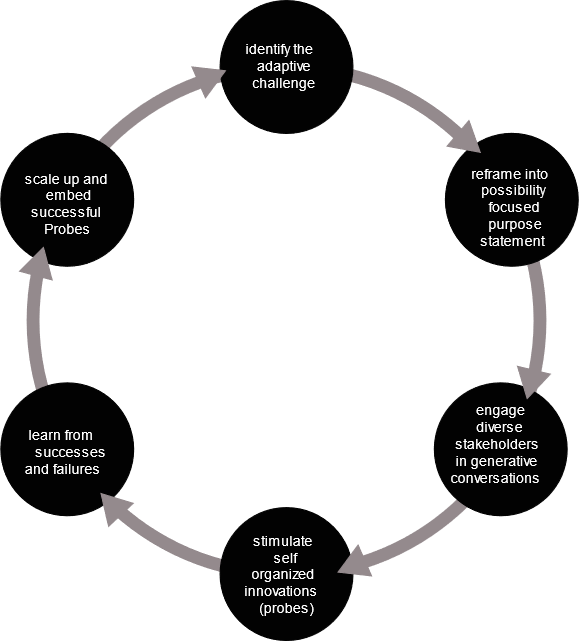 Reproduced from The Dynamics of Generative Change by Gervase Bushe

So, the planned change model is describing the more traditional process that consulting companies advocate and that hierarchical management approaches would orient toward correct?

Yes, and you can see how different the Generative Change model is.

So, a key question i4cp members will likely have about this has to do with when to use which model. Does it make more sense to apply your generative change model when there is less of a preconceived idea about where the organization needs to go? 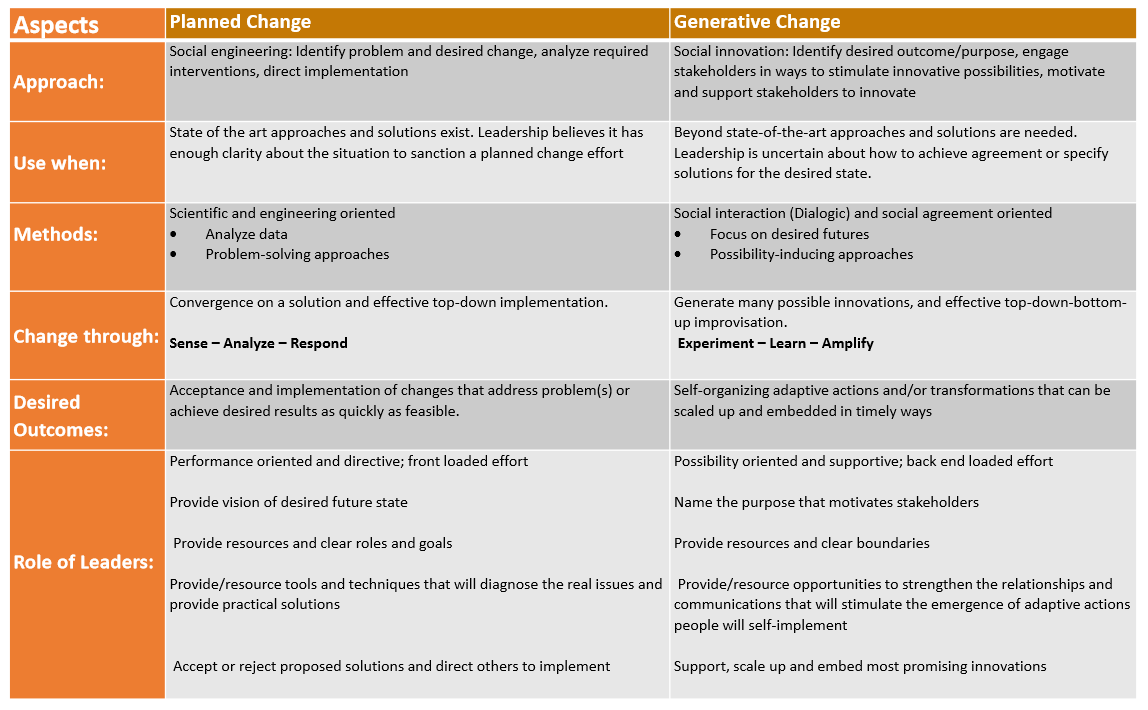 Yes. The planned change model relies on you knowing what change you want to implement—you know what it's going to look like a few  years from now or you think you know. It’s good for managing technical problems where there is a right answer.

The generative change model is appropriate when you don't really know what things will be like two years from now. You have an idea of the purpose you're trying to accomplish. But you have to depend on the people who will have to change to embrace the change and  it's really hard to predict what people are going to work with or not work with or how things are going to change. All of it really relies on mindset, one that accepts that organizations are conversations and that you can't really predict what people are going to do and you can't really control it.

Equally important is the idea that any solution to a problem of organizing  is going to create a new problem.

Because there is no one best way to organize. Organizing inherently involves a number of polarities, paradoxes, contradictions. So, you centralize, for example, because you've got too much dispersed activity and it's too inefficient but then it becomes too stifling.  And then you can't really deal with the local contingencies, so you decentralize. That works for a while but then it creates a new set of problems. So, every solution to a problem of organizing creates new problems.

If you operate from that mindset, trying to figure out the one right answer and then stuff it down everybody's throats, it seems like a lot of wasted time and effort. Instead, in generative change you say, “Okay, here's what we're trying to accomplish, here's our purpose. Let’s try stuff you think is going to work and learn as we go”

And purpose is different from vision. That's one of the central differences with the generative change model.

All these other planned change models rely on vision, and vision is having a clear idea of where you want to go and how you want to get there. Whereas purpose is what you're trying to do every day. There are many different ways to accomplish a purpose so that frees people up to innovate in ways leaders might never imagine.

From an adaptive change point of view you say to people, "Look here's the purpose we're trying to accomplish, what we all want more of. What do you think we should do about it?" And let them tell you what they're willing to go do about it tomorrow.  Then say, "good go do it," and pay close attention to what happens. You learn and adjust as you go.

Through this series of small wins you keep moving the ball forward, and after a while two things happen. One is that these things accumulate into a very large change – very rapidly, much quicker than trying to implement something. Second thing is that you build a more agile adaptive organization through the process of using a generative approach to whatever it is you're trying to work on.

And it works. The thing is that it requires a leader to say, "I don't know the answer, but I know the problem. I'm going to engage a bunch of people, and I don't know what's going to come of it but I have faith that it'll work out." And that's just not what we expect our leaders to say. And that sure as hell ain't what the board expects the leader to say. The board wants her to come in with her KPIs and her plan and all that. So, I'm focusing a lot more of my attention on how do I help the leaders who get it, but don't have a language for it,  justify it to the people they work for and the people who work for them. Because there are some people that work for generative leaders who think they're terrible leaders because they don't tell them what to do.