November 11th is Veterans Day, a time to celebrate the men and women who have served our country in the military. More broadly, November is National Military Family Month, recognizing the dedication of the loved ones who share their lives with service men and women.

i4cp salutes and thanks all those who served and currently serve our nation as members of the armed forces, and their families who also sacrifice for the greater good.

In recognition of the tremendous talent, skills, and dedication current and former service members (and their families) represent, we’re pleased to publish a new case study highlighting a visionary program developed by Microsoft to open opportunities in high-tech employment to veterans and transitioning service members. 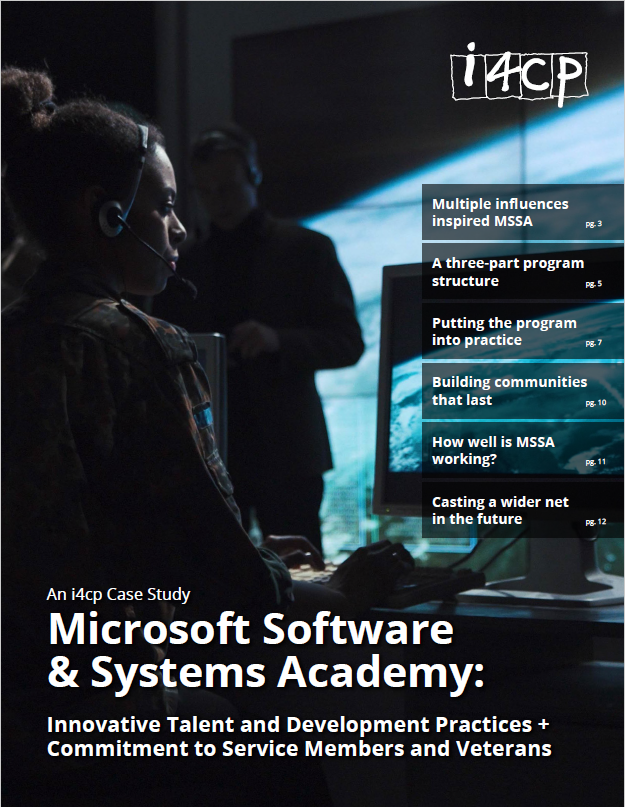 A focus on outcomes

“We do not consider it solely a training program, although training certainly is an important element of it. But we’re proud of our focus on outcomes. MSSA empowers transitioning service members and veterans with the necessary skills and training to compete for and attain meaningful careers in the technology industry. And in doing that, we are helping change the face of the industry.”

A retired major general with 33 years of service in the U.S. Marine Corps, Cortez knew the value of the military’s diverse talent firsthand. He also recognized the tremendous gap in technical talent that challenged Microsoft and other technology industry leaders.

When Microsoft became interested in combining its outreach for top job candidates with practical support for transitioning service members and veterans at the same time the U.S. Army sought to better serve those groups, the answer for both became clear, and the program was launched.

MSSA leverages contributions by partner universities, military staff and bases, tech associations, and others to provide training in the most in-demand technical jobs. But the program doesn’t stop there. Participating service members and vets also receive instruction and support in career and professional development, how to research jobs and companies, building networks, interviewing, and landing the tech jobs they want. Microsoft and its hundreds of hiring-partner companies tap into the richly diverse pool of trained MSSA graduates for the highly skilled and motivated candidates needed to fill some of the reportedly half-million-plus vacant jobs in the technology field.

Success is the order of the day

Since its inception a half-dozen years ago, MSSA has expanded to offer classes at 15 locations across the U.S. (many on or near military bases). The program boasts an impressive 93% graduation rate and has the capacity to train about 1,000 people per year. Those MSSA grads average starting salaries of $75k, and are building reputations for superior performance in their new careers.

As Cortez and his team continue to drive growth in the MSSA, their success has already produced an associated program—The Microsoft Military Spouse Technology Academy (MSTA)—to address the estimated $1 billion-plus costs of under- and unemployment among military spouses. The MSTA’s 2019 pilot program graduated 19 participants with the new skills and know-how to step into careers in server and cloud administration. Two new cohorts were set to begin training later in the year, marking MSTA’s first step in expansion to additional locations.

The full story of Microsoft Software & Systems Academy and the Military Spouse Technology Academy makes for a perfect November read as we recognize members of the military, vets, and military families.

Importantly, i4cp’s case study also includes links to the MSSA’s web page for businesses in need of outstanding technical talent. Access to program grads for potential employment is free. And joining the ranks of MSSA hiring partners is a great way to show your organization’s appreciation and support while also connecting with a continuously replenishing pool of top tech talent.

Get the full story with your FREE download of Microsoft Software & Systems Academy: Innovative Talent and Development Practices + Commitment to Service Members and Veterans.